As Maths Week 2018 draws to a close, we welcome a guest blog from Maths Olympiad Agnijo Banerjee.

Agnijo won gold at this year’s International Mathematical Olympiad in Romania receiving a perfect score of 42 out of 42 in the 2-day/nine hour-long competition, he was one of only two out of 594 contestants to achieve a perfect score. This was the UK’s first perfect score in 24 years. A truly remarkable achievement.

Last week Agnijo met the Deputy First Minister for lunch at Holyrood, after which he reflected on his achievement at the Olympiad and his hopes for the future.

I knew I had a passion for mathematics from a very early age. In primary school, I was always moved up several years until eventually they contacted Grove Academy and I ended up going there for maths. I was taught one-to-one by one of the maths teachers from Grove Academy and I did my Standard Grade in Primary 7.

Grove Academy has been extremely supportive of me throughout, and has always ensured that I am adequately challenged. In the last two years of school, I went to Dundee University to try some of their modules (third year in S5, fifth year in S6). 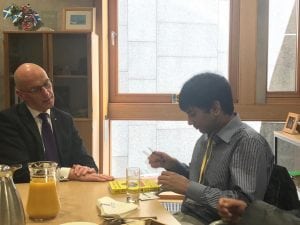 It was a wonderful experience to go to the International Mathematical Olympiad. The actual competition was over two days. On each day there were 3 questions to solve in 4 1/2 hours, with the first question on each day being “easy” (they are all extremely difficult, but these were easy relative to the others), the second being “medium”, and the third being “hard”. The two hard questions were extremely difficult but I managed to solve both of them. It was amazing to be the first UK contestant in 24 years to achieve a perfect score. ie 100%.

It was a great honour to meet the Scotland’s Education Minister Mr. John Swinney . I was invited to Holyrood to meet him during the Scottish Maths Week. I was very pleasantly surprised when he took a keen interest and asked me questions about the IMO and my other academic achievements. I felt greatly motivated by being recognised by the minister. I presented him a copy of my book Weird Maths , which hopefully he will enjoy reading.

In the future I want to reach the top of my chosen field- Mathematics and hope to able to make Scotland proud. 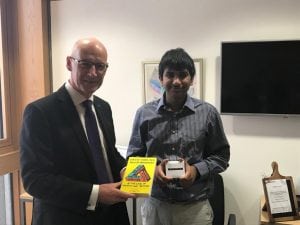 “It was a pleasure to meet Agnijo and his father today and Maths Week Scotland 2018 is the perfect opportunity to celebrate his astonishing achievements in the Maths Olympiad.

“Agnijo is a credit to Grove Academy and a shining example of how Scotland’s state school education can nurture ability and help talent flourish.