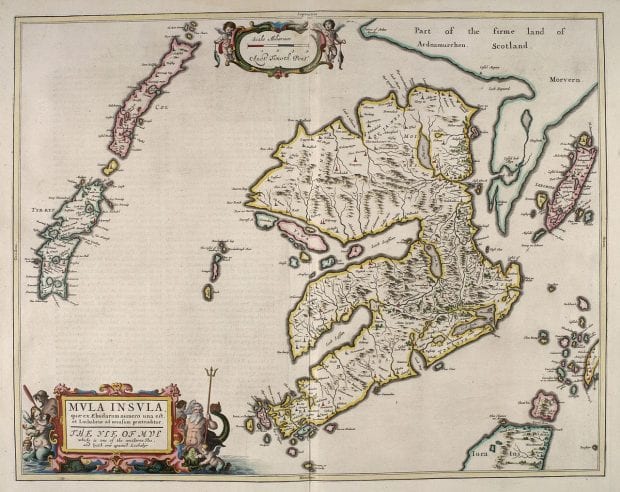 Sunday 12 August and it’s over to Ulva for the official launch of Community Land Week by Cabinet Secretary Roseanna Cunningham.

But first it’s Ullapool to Oban by way of Fort William, where I stop for coffee in my idea of a perfect cafe, which is happy to sell me a couple of slices of sourdough to have for breakfast on my forthcoming camping expedition. More of this below.

Waiting in a queue to be served I earwig an English man, telling his three children the story first of Glencoe and the massacre, then the Jacobite rebellion. They listen – for the most part – with rapt attention. He is exceptionally knowledgeable and as he talks, the chatter at other tables begins to subside and people start to listen in. His wife helps by fact-checking dates on her phone whenever he’s not sure. There’s an empty seat at their table so I sit down and when he finishes I can’t resist striking up a conversation. We talk of the romance of lost causes, I mention feudalism, one of his boys (who looks to be about 7) asks what feudalism is. I leave his dad to explain as it’s time to get down the road.

The next leg of the journey proves frustrating: just outside of Fort William I find myself behind a convoy of two lorries carrying bright yellow earth moving equipment. It’s probably visible from outer space. They crawl along at 20 mph, falling to 5 at tight corners for 47 miles. Normally these type of big loads pull over to let people go by, but these guys and their escort motorbikes don’t feel the need and soon traffic behind them is backed up for two or three miles.

Miss the ferry and my planned rendezvous with David Green of the Scottish Land Fund committee as a result. David has driven down from Achiltibuie but had the good sense to be in front of them. Kindly, he waits for me at Craignure (in a hotel whose architecture is unlovely even by the standards of the 1970s), so we can drive over together to Ulva ferry. When we get there he already seems to know all the locals, and the chat is of births, marriages and boats.

I meet up with two colleagues from our Broadcasting Unit, Tim and Jen. As we wait for CabSec, they do a spot of location scouting, and try to catch on film scores of swallows diving in and out of a shed by the shore. It sports a smart new sign declaring that Ulva is now in community ownership. CabSec arrives and it’s decided she should be filmed stepping off the boat on to Ulva, so we all go over first.  As she prepares to step off the boat into the puddles on the slipway I ask our host Ian whether he’d remembered to bring his cloak. For a fraction of a second he looks worried, then gets the joke.

We board the “Hoy Lass” for a trip along the coast of Ulva to get a sense of the scale and potential it has. The rain has stopped but a big cloud bonnet drapes over Ben More across the bay. We see a seal and the talk is of eco tourism and water taxis for walkers. The new owners have already started work on doing up the bothy at the far end.

We enjoy an absolutely wonderful seafood dinner, prepared by Ulva resident Rebecca, and her friend Emma. The shellfish tastes as if it had been pulled out of the sea an hour or two before, which indeed it had been. It’s by far the best food I’ve had on the trip so far.

I’m billeted along with CabSec’s private secretary Kyle in the big house, and we lug our stuff along a rough track in the fading light. A herd of red deer scarper. The house had been empty since the buy-out in June but we’d been told the electricity would still be on. Turns out it was, until an hour before we arrived, when a fault had resulted in SSE cutting it off.

The house itself is a traditional, harled laird’s house, set in garden grounds. Volunteers had been working hard on it since the buyout, the grass was cut and the hedges and shrubs had had a good haircut. Left to our own devices, we light a fire in the stove, find a couple of candles, and go exploring. The years roll back and we feel like characters in a novel by Enid Blyton (me), or JK Rowling (Kyle).

Appearances can be deceptive and the house had in fact been completely rebuilt in the 1950s, following a fire. The interior is all shabby gentility, apparently sound for the most part but a bit damp, and overdue a spot of rewiring. Servants’ quarters are in a wing with a separate staircase off the kitchen. It’s a time capsule: a TV restoration project waiting to happen. Fishing rods and nets, books on military history, dog leads and sailing charts are evidence of the interests and pursuits of the former residents.

Our favourite feature (apart from the beautiful fireplaces and an assortment of elegant but decidedly seen-better-days furniture) was the bell button by the side of the bath, presumably placed there so you could summon a member of staff to bring you a fluffy towel.

We give it a try, but no-one comes. The island is under new management now – it feels like Ulva has already taken its first tentative steps into the 21st century.