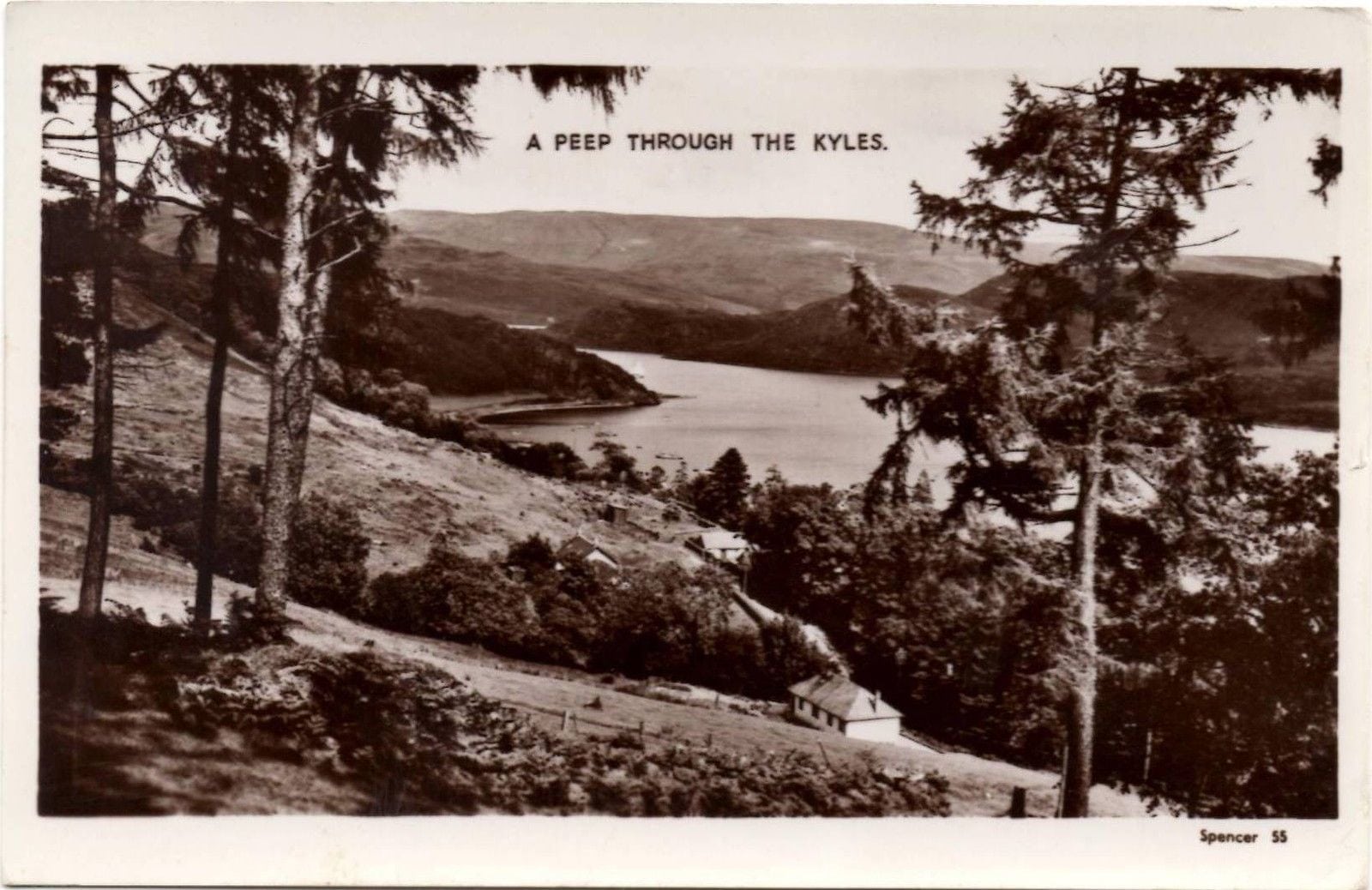 Best digs to date by far at Tregortha B&B in Tighnabruaich.  It’s under the new management of a lovely Hungarian couple, Carmen and Gabor, who’ve done a stylish make-over on it, and can’t do enough to make you feel welcome and comfortable.

I leave the curtains open, wake at around 4.30 am and look out across the Kyles of Bute at sunrise.  There’s a painting of a view framed by the window. It’s school of Mark Rothko – horizontal layers of colour: the water a soft gray, the summer-green hillside, above, a deep gray-blue-purple strip of cloud, under that a layer of pink that brightens, intensifies and then softens as the sun slides behind it.

A delicious breakfast involving home-made apple-and-cinnamon jam and proper coffee. The weather has turned, and the rain starts in a settle-in-for-the day kind of way.

“A Forest for Life”

Tregortha is almost next door to Kilfinan Community Forest’s office (sign: “Kilfinan – a forest for life”).  I meet Simon and Geoff (camera and sound) to plan the day. Shortly after Mick Eyre arrives. He is Forest Access Co-ordinator, and turns out he does exactly what his job title says on the tin. Over the course of the day we’re shown round a dizzying variety of sites and projects – workshop space for various local craftworkers; an iron-age hut built by a mental health recovery group; allotments leased to locals including seasonal/local restaurant, Botanica; a new building going up for an outdoor nursery; women’s woodworking groups; a sawmill; a hydro; and a path network and mtb trails are in the making.

Mick is quiet and generous in crediting others, but his eyes shine with passion for the job, he’s steeped in knowledge about all aspects of the forest as well as local history. These are the qualities that bring people in and keep them engaged.

His mission is to nurse the forest back to biodiversity, after an earlier life as a sitka plantation mixed with the usual rampaging rhododendron. As we walk along Mick pulls up any rhodi saplings he sees, it’s as persistent as knotweed.

Especially impressive is the hut built by the Branching Out group – the NHS supported this project as a therapeutic intervention for people experiencing mental distress. Mick says the research is showing that it costs less and has better outcomes, than drugs. Kids use it as a playhut; it’s also used as a meditation space, it’s becoming a bit of a visitor attraction as well.

On a raised beach…

We then move over to neighbouring Glenan. This community group is just starting out on their acquisition of a very beautiful bit of Atlantic oak woodland fringing the raised beach by Portavadie. Michaela joins us – she was the main driving force behind the Kilfinan buy-out. Kilfinan is supporting the Glenan community as they set off down the same route. She gives a great talk about the raised beach – straight to camera. Later Michaela and her friend Nikki speak about the challenges and low points they had in the five years it took them to get Kilfinan going. Their hard work and persistence has made it easier for other groups to follow in their footsteps.

Scouting round off the beaten track first thing, I had spotted a small soggy teddy bear, dressed in a Scotland football shirt. Next to him was a disintegrating (and illegible) laminated card. Simon and I speculated about shrines, or maybe an offering in advance of a must-win game. I ask Mick about it, it turns out to have been left during a school fundraiser involving a teddy bear trail. Mick asks me to show him where he was left, and goes to pick him up.

No soldier is left behind in Kilfinan.