BlogsLand and CommunityCommunity Land Week 8: Mull of Galloway - to the Lighthouse!

Community Land Week 8: Mull of Galloway – to the Lighthouse! 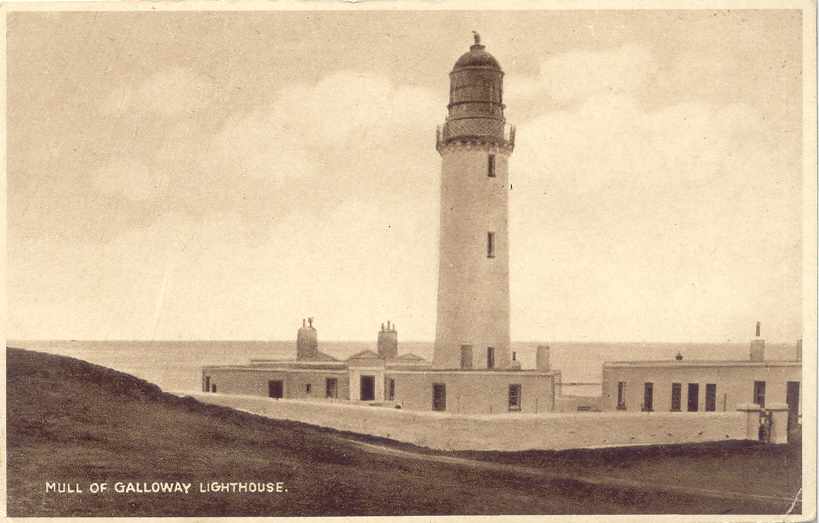 It’s a long way to the Mull of Galloway from Crianlarich, and there’s a delay on the A82 near Tarbert. A woman riding pillion on a motorbike has been thrown off, her leg is broken and the road is closed for a while. Even walking on it, the road surface feels greasy from recent rain. It could have been worse.

Around about Lockerbie, with roughly 85 miles still to go, I realise I’ve no chance of getting there on time and phone the sound engineer, Guy, to let him know. As I swing along the coast to Stranraer I notice the slight intensification of the light you can get on a sunny day by the sea. The road eventually narrows to a single track, I see the lighthouse in the distance, the road rollercoasters down and then up to the high point of the cliffs on which it is set.

The setting of this one – built by Robert Stevenson – is dramatic. A quick google for lighthouse quotes throws up hundreds of them. Here’s my favourite, from Robert Louis Stevenson:

“Whenever I smell salt water, I know I am not far from the works of my ancestors. The Bell Rock stands monument for my grandfather, the Skerry Vhor for my Uncle Alan and when the lights come on at sundown along the shores of Scotland, I am proud to think they burn more brightly for the genius of my father.”

The garden party is in full swing, with local band Cliff Top and the Foghorns rattling through a range of classics, many from the 50s and 60s. I soon find Linsay Chalmers, of Community Land Scotland, who along with her colleague Emma has done most of the ‘heavy lifting’ of co-ordinating Community Land Week. Also there and hard at work are the two film crew for the day, Jim and Guy, and the key members of the Mull of Galloway Trust.  Here’s the result of their efforts:

The Mull of Galloway boasts the only working foghorn on the mainland. It went out of active service in 1987, but the three Kelvin K2 engines that operate have recently been restored by local engineer Steve. The machinery sits in a room that is part of an excellent small museum. It has the look of proper Victorian steampunk, Steve shows it off proudly to visitors.

Slightly disoriented, I wonder what the island is I can see lying to the south; it turns out to be the Isle of Man. The Mull of Galloway is further south than Newcastle.

It’s warm and sunny, there’s tea and cake, there’s families and tourists, the car park is packed. I’m introduced to Ron Ireland, who was the last lighthouse keeper before it was automated. He’s an absolute dream of an interviewee, and a real charmer. In the museum is a photograph of him with his family from around 1984.

Diane James is Treasurer of the Mull of Galloway Trust. Here she is: 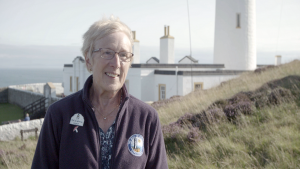 Along with their Chair, Maureen Chand, she’s typical of the dedicated, hard-working women who are the backbone of these kind of community enterprises. Retired from a career in finance, she keeps the books. She’s full of interesting information about the Trust. They recently made a bit of money as a location hire for the film Keepers, starring Gerard Butler and Peter Mullan. Their lighthouse was one of four standing in for the famous one at Flannan Isles, from which the three keepers disappeared in an ‘x-files’ type mystery. Dianne and I remember from school the poem about it:

Aye: though we hunted high and low,

Of the three men’s fate we found no trace

Of any kind in any place,

But a door ajar, and an untouched meal,

Well, all good things come to an end, and so does this lovely last-day-of-summer afternoon in the Mull of Galloway. With it comes the end of the first ever Community Land Week. My thoughts turn to arranging a meeting Linsay to debrief, so we can start thinking about next year…