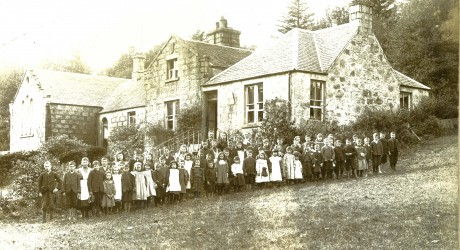 Back in December I was invited to join HIE and National Lottery Community Fund colleagues for a Scottish Land Fund “learning event”. Hmm, I thought, Strontian in February – over Rannoch Moor, the Corran ferry then single track roads – probably a snow tyres job at best, maybe even find a fellow learning eventer with a 4×4…

But I needn’t have worried. In the new climate reality temperatures were headed towards record winter highs and daffodils were blooming – albeit, it seemed to me, somewhat reluctantly. Driving past brown mountains with just the odd high-level patch of snow shrinking in the warm southerly wind, I felt nostalgia for the dazzling white majesty of winters past.

We gathered in the Sunart Centre in Strontian, part of a complex of buildings that includes the secondary school, a library, and a newly built primary school annex. A tasty lunch was followed by a series of lively sessions, the final one a presentation from Jamie McIntyre, Treasurer of the Strontian Community School Board of Trustees.

Strontian is one of the more ambitious projects to have come forward for Scottish Land Fund support and if I’d had a hat, I would definitely have taken it off to this community. As their 1970s primary school came to the end of its life (a short one compared to the original, pictured above, which had lasted 150 years) – the Highland Council began consultation over its replacement.

To cut a long story short, by 2015 it became apparent that if local people wanted a high quality, permanent building for their children, they would have to build it themselves. And to their credit, they came up with a plan – the community would buy a site (with funding from the SLF), build a school (with a mix of community shares, charitable funds, some money from THC and a big loan from Triodos bank) and lease it back to the council.

From having this idea, in not much over three years they had built and opened an attractive, light-filled, two-classroom primary school. And what was more a building capable of conversion to future use as housing (if no longer needed as a school).

Now I’m no expert on school-building projects but I’m willing to bet that most of them proceed at a rather more stately pace. Under four years, considering the web of contractual relationships, and the input needed from the council departments (education, planning, building control, finance, legal) – really seemed to be supersonic.

After Jamie’s engaging and informative presentation the Head of the secondary school showed us round. He spoke about how important having a local secondary was in retaining young people in the more remote rural communities of Scotland. Where teenagers had to move to residential centres in the larger towns for school, they were much less likely to return to live and work where they grew up.

On the other hand, the Head was frank about how difficult it was for them to recruit and retain teachers – so much so that they were contemplating a “3-18 campus” arrangement to cater for the 50 or so children in the Strontian area.

The council’s requirements for physical security meant a high wire fence around the classrooms, which looked a bit OTT in the Highland landscape but on the plus side, kept the deer out.

Entering the recently completed annex my first sense was of the distinctive scent of a new building, combined with that ‘takes you back’ smell of primary school – the mix of pencils, crayons, paints, glue. A sign on the wall urged the children:

I thought that many a workplace would benefit if everyone followed those simple principles.

I noticed a graph on the wall showing months with the birthdays of each pupil.  Various rooms and facilities were labelled in French as well as English.  A kind of word garland hung from the ceiling that conceptualised “levels” of thinking,  I thought it would not have embarassed a university philosophy department.

After a bit of exploring the city limits of Strontian in the dark, we found our BnB (Uircheann Righ). Run by Nigel and Julie, it was definitely on the boutique end of the spectrum. Our only disappointment was that we’d been too greedy to resist the cake offered during tea-break earlier – Julie had gone to the trouble of putting out a home-made one.

An SLF adviser staying next door had a “Local Hero” moment when she arrived at her lodging to find her host was the same lady who’d served up the afternoon tea in the centre.

By coincidence, in my bedtime reading (“Home” by Marilyn Robinson, a wonderful novel) I come across a mention of Strontium 90, which of course took its name from Strontian.  Not an element you often come across in fiction (and fortunately, in real life either).

We have an excellent breakfast in the morning with a stunning view through the picture window, across the glen.  We can’t resist teasing our young colleague about her very millennial liking for avocado on toast.

The morning saw more sparky sessions, including one about the trend we’re seeing in SLF applications for high street buildings like banks, shops and pubs – where changing patterns of demand, combined with communities’ reluctance to see them close, create particular business planning challenges.

After the learning event ends, I can’t resist driving 10 minutes further along the road to Resipole, where there is a truly wonderful art gallery/craft shop – don’t miss if you’re in the area, some really first-class work for sale.

On a cool, cloudy October day, the remnants of Hurricane Lorenzo are fizzling out overhead, and I’m headed to Ochiltree…

On a sunny, breezy August afternoon I take the A703 south to Sanquhar, in Dumfries and Galloway. It’s Community Land…