At sunrise on a frosty April morning, I am on my way to work to meet Kyle, who has recently joined our team as a Modern Apprentice. We’re driving up to Fort Augustus for the opening of their new Medical Centre. It has been funded partly by the Scottish Land Fund, and partly by Scottish and Southern Energy, through wind farm levies.

Before 1715 Fort Augustus was a tiny settlement known as Cill Chumein. Then as part of the pacification of the Highlands, General Wade built a fort there, and renamed it. The village now sits on either side of the Caledonian Canal. Among many other attractions it boasts some spectacular lock gates, and a Canal Heritage Centre.

Partly, I’m looking forward to this because it’s Kyle’s first journey north of the central belt. So although I‘ve taken these roads many times it’s a bonus to see the scenery anew through the eyes of a young travelling companion.

We drive through haar over the Queensferry Crossing and up the M90 to the A9, soon the cloud breaks and skies clear to a vivid blue. Spring has come early, swathes of shouty yellow daffodils line the sides of the road, and lambs in the fields are doing their bit, showing off their moves and racing each other. Some seemed to have acquired the ability to take off vertically.

My policy is that the driver gets to choose the music, so we’re listening to Radio 3.  It’s “International Siblings Day”, apparently, so that’s their theme for the day. Soon they’re playing “Sisters”, lyrics by Irving Berlin:

Which makes me think of ‘Fleabag’. The more things change, the more they stay the same.

On past Perth and up to Dalwhinnie, there are puffs of mist on the hillsides here and there, dissipating in an absent-minded way in the warmth of the sun. When we reach the Drumochter pass we hit low cloud, but soon a gap opens and the top of Geal Charn looms, the summit ridge edged with snow.

Geal Charn means, ‘white peak’, there are a few of them and we’ll pass another shortly, one of many Munros flanking the A86 along the side of Loch Laggan. Being that the trees are not yet in leaf we get a glimpse of the Scots Baronial pile of Ardverikie House across the water. We pass Creag Meaghaidh Nature Reserve, a brilliant example of what happens when deer are fenced out and the natural forest regenerates. It also does a three-for-the-price of one deal on Munros.

At Spean Bridge we turn right for Fort Augustus, stopping for a quick look back at Ben Nevis and the Grey Corries from the vantage point of the Commando memorial.  Then along Loch Lochy to Invergarry, our progress slowed by four motorhomes travelling in convoy.

We reach Fort Augustus around 40 minutes before proceedings are due to start. The Minister for Rural Affairs and the Natural Environment, Mairi Gougeon MSP, is already there, along with local MSP Kate Forbes, scores of local people, the Chair of the Fort Augustus Community Company Harry Whiteside, and the doctors and staff of the surgery. Plus, assorted funders, stakeholders, photographers and 3 TV crews. Here’s Harry with Mairi Gougeon cutting the ribbon:

Among the crowd are two teachers who, the world being as smal 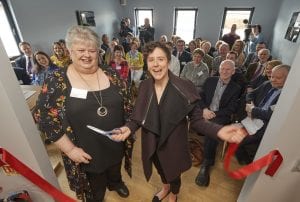 l as it is, had taught Mairi some years before, when she was in high school over the other side of the country, in Angus.

Separately and by coincidence, the teachers had subsequently moved to Fort Augustus. There is a mini high school reunion, and they look proud of her.

The official opening was due to be carried out by Cabinet Secretary Roseanna Cunningham, but Brexit stuck its spoke in this wheel as so many others: she had to be around in Edinburgh in case Friday brought no deal and the Scottish Parliament was recalled. Thankfully Ms Gougeon was able to take her place.

Mairi Gougeon and Kate Forbes are part of a new generation of young women making their way in the traditionally male-dominated world of politics.  I feel happy to hear them speak with passion and intelligence about community and community projects. Both have a relaxed and unpompous style that win over their audience straight away. 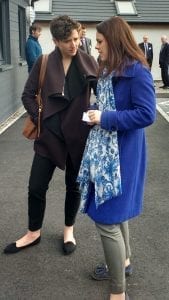 The photographers are loving the whole occasion especially the photogenic husband-and-wife team of GPs who have recently taken over the medical practice in Fort Augustus. 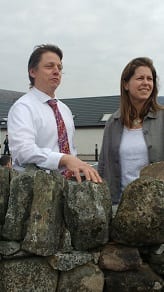 At lunch I am seated with the doctor who preceded them who is now retired, but busier than ever running a bed and breakfast with his wife. As we chat away we discover that our respective bookshelves contain some of the same books, with Edward Said and books on Arctic exploration both featuring. His son has just begun work in maritime engineering so I recommend ‘Down to the Sea in Ships’, an excellent book.  It’s about life on board the gigantic freighters that move consumer goods across the oceans.  Shipping lanes are the veins and arteries of the globalised economy.

Also at our table is the architect of the Centre who talks about the new ‘Loch Ness 360’ off-road bicycle route, just completed. It goes round the loch and is another magnet for outdoor activity enthusiasts to come to this area. Now’s the time to do it, before the midges come back.

On the way back we make three short stops for photo opps – one involving a quick detour to the head of Glen Nevis, one in Glencoe in front of the Sisters (theme for the day, remember?) and one in front of Buchaille Etive Mor. Luckily for both of us, a cup of tea at the Real Food Café keeps me awake for the final two hours of the drive home.