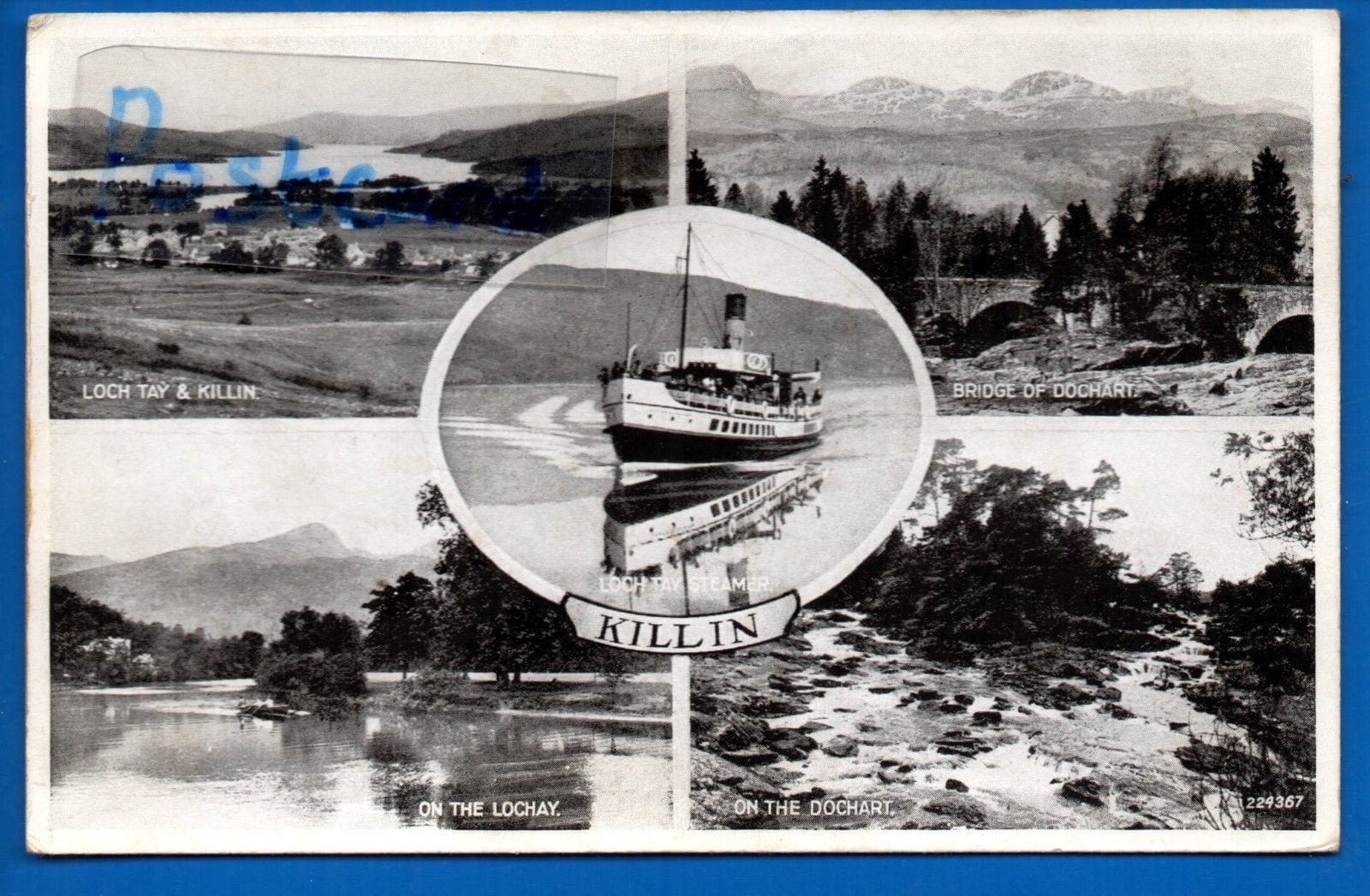 Killin nestles under the Lawers range at the west end of Loch Tay. I’ve got an invite to the opening of the community’s new premises for their postoffice/newsagent. It’s wet wet wet, and has been for days, the weather resuming something like normal summer service after last year’s heatwave.

The verges are frothing with cow parsley, and hawthorn is having a moment, with here and there great fountains of its creamy flowers. Through Callandar – normally a buzzy wee place – but today a bit subdued by the rain. Still, the gardens of the elegant Victorian stone houses make up for it. A riot of rhododendron colour splashes against the dark copper beeches, it makes me think of a 1950s jigsaw puzzle, or maybe a cover of the People’s Friend.

On up the side of Loch Lubnaig. No foxgloves yet but bluebells are having their last few glory days, febrile against the unfurling green ferns. Past Lochearnhead and up Glen Ogle, I briefly recall the two simultaneous landslides that trapped cars here a few years ago. An engineer once told me that slopes about to slip are known to be ‘at a critical angle of repose’. Fortunately the earth slumbers on quietly and I arrive uneventfully at Killin.

I pop into the shop to say hello to Theresa Elliot, project manager for the Killin and Ardeonaig Community Trust, who is busy getting everything ready. As in many rural villages their shops are struggling, so the plan is for the Trust to buy this one and relocate three businesses into it. With the SLF funding the purchase they’ll save on the rent and hopefully be able to turn a profit. The post office is an essential local service, particularly for those who don’t drive, and their range of local and speciality foods should go well.

One shop that does look to be thriving is the old-fashioned sweetie shop, so I contribute by buying a bag of soor plooms to take back to the team. At the risk of breaching the civil service code on impartiality, I’d say there’s only one thing to beat a soor ploom and that’s a pineapple chunk.

I’ve time for a quick tootle round Killin and a look at the Falls of Dochart. It’s a famous location for photos, postcards and films – here is Kenneth More, consulting his map on the bridge, as he escapes the baddies in the 1958 remake of Buchan’s “Thirty-nine steps”: 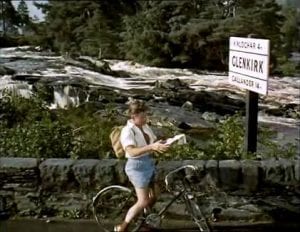 Richard Hannay on the run…

Every cloud has a silver lining, and as the Dochart rushes towards its confluence with the River Lochy, the Falls are spectacular – water water everywhere, crashing, spouting and foaming over the black rocks, under the handsome bridge and past the ancestral burial grounds of clan MacNab on the river island of Inchbuie. The road over the arches is narrow, almost single-track, but it’s the best viewpoint, so tourists struggle to hold up their umbrellas, take photos with their phones, and keep an eye out for caravans. Over the continuo of the river there’s a constant musical patter of water dripping from the trees.

There’s a tiny museum upstairs in the old mill by the Falls, it contains the Healing Stones of St.Fillan.  St Fillan is much associated with Killin and Glen Dochart, and also with water. Not far up the road is his Holy Pool, where in mediaeval times folk who were showing signs of mental distress would be thrown in and told to bring up stones from the bottom.

In the 19th century some people flung in a cow, presumably in a spirit of scientific enquiry – and with that act of disrespect, it’s said that the healing power of the pool to an end. Still what goes around comes around, and today many advocate wild swimming as a sure cure for the blues. So perhaps St Fillan was on to something, though I daresay there’s more benefit to the sufferer when they take the plunge by choice. 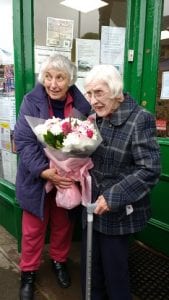 Ruby is presented with a bouquet

The opening happens at 2pm, and brings together young, old and inbetweeners.  Ruby Fulton, a Killin local resident since the end of the second war, cuts the ribbon.

Chair of the Community Trust Liz Stevens says a few well-chosen words, and the shop is declared open. It’s great to have a chat with Ruby, I find out she has four children, and fifteen grandchildren. Before she retired she was a cleaner at the village primary school. “There weren’t that many jobs around here in those days”, she says, “but… I did enjoy it”. She’s 96 and as sharp as a tack. She might have found more opportunities now, what with Brexit making it hard to fill a range of jobs in rural areas, not only the obvious hotel/restaurant vacancies, they’re even struggling to recruit vets.

A competition for local children to come up with  a logo for the new shop has been won by Lily Hill.  She’s a worthy winner with ‘Och aye the News’, which wouldn’t disgrace a fancy advertising agency.

A very decent spread has been laid on so I enjoy one of the major perks of this job – home baking.

Killin’s a lively village, among other happenings over the summer they’ll have Highland games, a folk music festival (14-16 June), the Bob MacGregor Memorial Motorbike Trials, an Agricultural show and a 10k marathon.

The event comes to a close. As I take my leave, the gentle rain droppeth still from heaven, upon the place beneath. It’s as if St Fillin himself is looking down and bestowing his watery blessing on the community’s latest enterprise.