On a cool, cloudy October day, the remnants of Hurricane Lorenzo are fizzling out overhead, and I’m headed to Ochiltree in East Ayrshire for the opening of their new Community Hub.  Overnight temperatures have dipped, and reds, browns and golds tinge the trees and bracken: autumn is making its presence felt. The dull greens of late summer are in retreat.

Today’s opening comes after no less than six years of hard work, which started when the council had to close the outdated building next to the school.  It had housed the library and community centre, but the community decided to take ownership of the site and set about reinventing these facilities for a new century. The Prince’s Foundation for Building Communities, the Minerals Trust, and the Coalfield Regeneration Trust all pitched in to get the project off the ground: the Scottish Land Fund gave a grant for acquisition of the land. The new building cost near on £2 million – there are too many funders to list, but much of the money came the National Lottery’s Community Assets Fund and the Regeneration Capital Grant Fund.

It speaks volumes for the good relationship between the Trustees of the Hub and the council that they have invited the Chief Executive, Fiona Lees, to do the honours and open the new building. East Ayrshire seem to really get it when it comes to community empowerment. They’ve done 52 asset transfers to date. They only transfer assets, not liabilities, and they support communities through the long haul of constituting a group, assembling funding packages, commissioning architects, getting planning permission, and letting contracts. Post-opening, they don’t wash their hands of it all, but instead quietly carry on helping in the background with training and support in areas such as health and safety, first aid and food hygiene.

Architects Anderson Bell Christie designed the new Hub. This practice has an long and impressive track record – they design super-energy-efficient, neatly-detailed buildings that are the result of a lot of thinking about their client’s needs. Visually, the new Hub is on happy terms with its neighbours in this attractive conservation village. 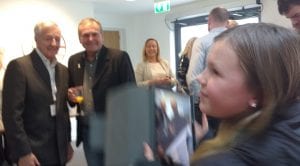 While Chair of the Hub Trustees, Alex Baird, gives credit in his speech to the other trustees and practically everyone else in the room, Fiona has to remind him not to leave himself out. If you feel the need of an antidote to the ‘look at me, look at me’ culture of reality television, try a community opening event. Here is Eva taking a photo of Alex for the school magazine.  Before he retired Alex was manager of Tagart’s Jaguar/LandRover in Motherwell – a whole, valuable life experience of managing, delegating, consulting and representing, is visible as he masters the ceremonies.

I’m seated next to

the local Church of Scotland minister, Rev. Morag Garrett. Clearly determined to shake off the old, dour image of the church, she seems a lot of fun.  She is rockin’ a look involving an elegant jacket-and-trouser combo, finished off with a sparkly dog collar and a pair of very on-trend shoes.  You can see a video about the Hub and the opening event here:

For such a lovely part of the country, East Ayrshire is if anything “under” rather than “over” touristed. But Ochiltree is benefitting from a steady increase in visitors, many drawn by two spectacular Palladian country piles in the immediate area – Auchinleck House, built in 1760 by James Boswell’s father, Lord Auchinleck, and Dumfries House, begun by the Earl of Dumfries around the same time. Both have been saved for the nation in recent years. The Adam brothers’ classic Dumfries House (and its extraordinary contents) were rescued in the nick of time by a £45 million funding package pulled together by Prince Charles. It’s now a model of heritage-led regeneration: after the council, it’s the second largest employer in East Ayrshire, with 200 staff.

Auchinleck House has been beautifully restored by the Landmark Trust who rent it out to house parties. You could take tea in the Library, where famously, Lord Auchinleck (Presbyterian and Whig) and Sam Johnson (High Tory/Anglican) had what sounded like a volcanic disagreement about the politics of the day. If you do rent the house, perhaps best not risk taking people who disagree with you about Brexit, lest you summon the ghosts of discord past.

In a fine speech which visibly touches many in the room, Fiona begins by saying that in forty years and more of public service, this is the first time she has been asked to open a building.  She shares the honour, she says, with many of her colleagues in the council.  She says, rightly, that the building will be an asset for the children and grandchildren of the community for many years to come. She ends by quoting local Ochiltree resident David Reid. The night before David won the Ayrshire “Good Neighbour” award, organised by local radio station West FM. Accepting it, he said “Well, I was a miner, and when you work underground, you help your neighbour. And I’ve just kept on doing that”.

The speeches over, children from the primary school join the party.  Some of them give a mini concert on their wind instruments: their parents in the audience look especially proud.  A time capsule is buried in the grounds of the Hub.

The material heritage left by my lords Auchinleck and Dumfries is outstanding.  Both buildings show the influence of the fashionable neo-classical European architecture of the day, and are also products of the Scottish Enlightenment.  But legacies come in many forms. In nearby Cumnock there is a memorial to Keir Hardie, and a Keir Hardie Hill. His achievements and values, including his role in founding the Labour party, his support for women’s rights, land reform, pacifism, race equality and many other causes – have an influence that’s felt to this day, in Scotland and beyond. Perhaps it is something of his spirit you can feel living on, in the strong sense of mutual aid, co-operation and inclusivity in the new Ochiltree Community Hub.

Prev “A’ The Airts”, Sanquhar
Next Dunshalt: reinventing the village shop