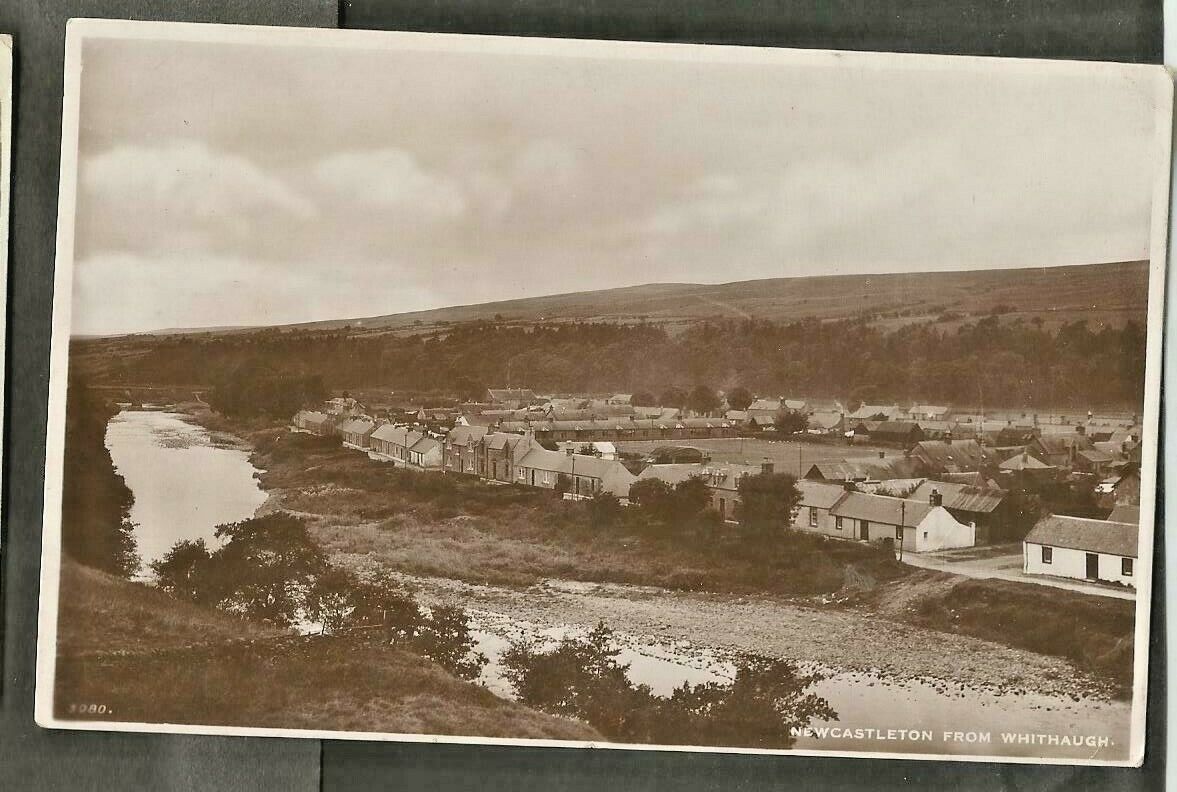 Newcastleton, in Liddesdale is about as deep in the Borders as you can go. Roll over one or two more hills and you’re in sight of Hadrian’s Wall. The village – known locally as Copshaw Holm, has been described as a ‘landlocked island’ – reaching it via any form of transport has its challenges.

School holidays bring a drop in traffic levels, so I risk it for a biscuit, take the by-pass, and brave the Sheriffhall roundabout to get to the A68. This goes well and it’s not too long before I’m past Jedburgh, and swinging west along a B-road, for the 25 miles left before Newcastleton.

The road is lined with trees and high beech hedges. Autumn’s late, but colder nights are now orchestrating their annual transition to a tourist ad spectacular of burnished copper and gold.

The coaches and lorries on the A68  thunder on, and I squeeze along the narrow road, past a succession of rugged, mud-spattered pick-up trucks with scary-sounding names.  One has collies in the back, another tows a horse box. I find myself behind this one, but needn’t worry – they’re skelping along, with a bouncy disregard for convention when it comes to which side of the road they should be on. At a handsome gated entrance to an estate, a car that has seen better days turns in and stops, and a tall elderly lady in a tweed skirt gets out. She has the look of someone who might be getting a bit doddery but is still In Charge.

Onwards to my destination, where I arrive respectably early for a change. Our Minister, Mairi McAllan is paying the Newcastleton Community Trust a visit to promote Community Land Week, and hear about their achievements and plans. In June 2020 they were awarded £850,000 from the Scottish Land Fund to acquire 750 acres from Buccleuch Estates. She’s met by Trust secretary Barbara Elborn, and Community Council Chair, Greg Cuthbert.

With the Minister’s car charging at the community-owned fuel station, Barbara and Greg whisk her round project after project: the bunkhouse (on site); Whithaugh Bridge (complete, now used by 30,000 pedestrians and mountain bikers each year); the sports field, the heritage centre, the village hall…and that’s before we go up Holm Hill, to hear about their plans for becoming the go-to destination for outdoor activities in the south of Scotland. They don’t do things by half in Copshaw Holm.

Greg says that before the third Duke of Buccleuch built his ‘model’ village in 1790, three or four hundred farmsteads were scattered across Liddesdale. People from the farms, and from Old Castleton, were relocated next to the river to capitalise on the textile industry. That’s long gone, but a combination of climate change and (Barbara says) forestry practices is raising the flood risk. Liddel Water burst its banks in February 2020 and just as the community was recovering, did so again a year later, almost to the day, in 2021.

Delving further back into history, Graham Robb’s excellent book, The Debatable Land, (see review here: https://www.theguardian.com/books/2018/feb/10/debatable-land-graham-robb-review illuminates the deep cultural, economic and social ties binding the communities who live north and south of the border in this area.  From mediaeval times, the English and Scottish crowns tried a variety of tactics to subdue these unruly parts, from sending in militias, to exploiting rivalries between the reiving families. Meanwhile, the Nixons, Armstrongs, Elliots etc. melted into the mosses and waters, and watched from their pele towers. They also knew how to play both ends off against the middle: for example, offering sanctuary to enemies of the state who had fled across the border – then ransoming them off to the highest bidder.

Robb records that in 1591, the ancestor of the current duke, Walter Scott, Laird of Buccleuch, owned estates that were already extensive. According to English border officials, he added to them with a campaign of murder and rapaciousness which was epic even by the standards of the day. Fortunately, from what Greg says, the current Duke seems to be a much nicer person to deal with.

We drive up to a viewpoint offering what must be the most expansive vista in the Borders, where there is plenty of vista competition. Greg and Barbara talk of their plans for mountain bike trails, disabled-access walks, hobbit houses under dark skies, eco tourism, peat bog and forest restoration, affordable forest croft homes…by this time I feel I’m in an episode of Your Community Made Perfect, wearing a virtual reality headset and watching projects popping up all over Liddesdale.

There’s a real sense here of a community with a strategic vision, and the energy and capacity to make it happen. When we chat later, Barbara asks after David Knight, a Scottish Land Fund adviser who helped them cut their teeth on their first project. They had clearly clicked. David has a particular gift for working with volunteers and gently pointing people in the right direction (as opposed to telling them what to do). If he ever gets round to retiring, the SLF will really miss him.

Barbara mentions at the end that the Borderlands Partnership has just published a prospectus to inform  discussions with the UK and Scottish governments about extending the Borders Railway from Tweedbank to Carlisle. She makes the case for it going through Newcastleton. You wouldn’t bet against her pulling this off – the French word, ‘formidable’, describes her perfectly. She could probably get HS2 up to the village if she put her mind to it.

Prev Community Land Week is back!
Next The next Land Reform Bill – launch of consultation