Aberdeen Community Health and Care Village and the Golden Games 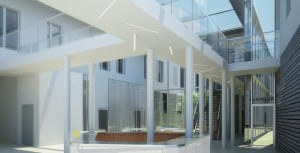 When we asked through this blog back in January for opportunities for the team from Integration and Reshaping Care to get out and about and see good examples of how reshaping care for older people is being carried out on the ground, we received a few great invitations, and I was lucky enough to get to visit one of them on Tuesday, at the invitation of Sandy Reid (Senior Service Manager, Aberdeen Health Village).

Aberdeen Community Health and Care Village is right in the centre of Aberdeen, 10 minutes’ walk from the station, and only a few minutes from the shops on Union Street. The centre opened in December 2013 as an urban community hospital (without inpatient beds).

It’s a striking, bright and airy building, very welcoming, and from the minute you arrive, you can see the focus is on joining up all aspects of the care and support someone needs. As you enter the building, straight ahead of you are the café, healthpoint information area and the carerspoint space.

The healthpoint provides free, confidential walk-in advice on health improvement and accessing NHS services – amongst other things – and they had a very graphic display of the saturated and unsaturated fat contents of various foodstuffs. It certainly made me think twice about what I ordered for dinner last night afterwards!

The carerspoint is a joint venture between Aberdeen City Council, NHS Grampian and local voluntary organisations, providing information, advice and support to those who provide unpaid help to family members or friends.

After Sandy filled me in on the history of the centre, and the work going on in the Grampian NHS/Aberdeen City area on integration of health and social care, I had a tour of the rest of the building. This is going to become a fantastic resource for Aberdeen – with the region’s only bariatric dental suite, alongside other services such as a sexual health clinic and, increasingly geriatric services.

Next up was a meeting on physical activity (which I gatecrashed) between other colleagues from the Scottish Government and the three partnerships in the Grampian NHS Board area (Aberdeen City, Aberdeenshire and Moray).
And to round off my afternoon in Aberdeen, I got to take part in the Golden Games. The Games are in their fourth year now, and at least 300 older people will take part in 46 activities this week – as diverse as rock-climbing, skiing, table tennis and aqua zumba. 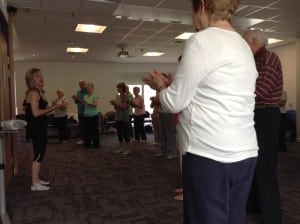 I got to try my hand at Chi Gung (similar to Tai Chi) and then a chair-based ceilidh. This doesn’t involve wheelchairs whirling around like whirling dervishes, but is a chair-based set of exercises – or at least the first half was.

The second half was standing and reminded me that I really do have two left feet and was far less co-ordinated in my dancing efforts than those people there twice my age! (Heaven help my dancing partner at the wedding I’m going to soon!) 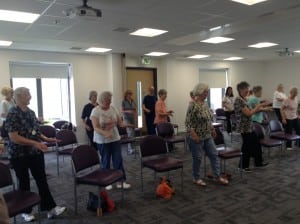 The Golden Games has been really successful in Aberdeen in encouraging people into activities they may not have considered before, and many have continued long after the Games are over – the table tennis players from last year’s Golden Games now meet each week and are the only group that takes over all 12 tables in the venue at once. 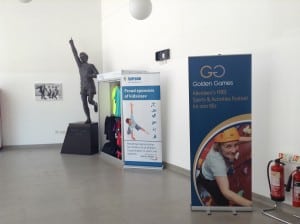 A big thank you to Sandy Reid for inviting me up to the Aberdeen Community Health and Care Village and for his hospitality, and to Heather Kelman and the rest of the staff at the Health Village and those organising and running the Golden Games.

Care homes: why ‘My Health My Care My Home’ matters

Dr Paul Baughan, GP and Professional Adviser to CMO on Ageing and Health reflects on the development of ‘My Health…

In this blog, Carol Sinclair explores how good quality health and social care data can improve health and care services.…