Why the National Performance Framework needs to be kinder to itself 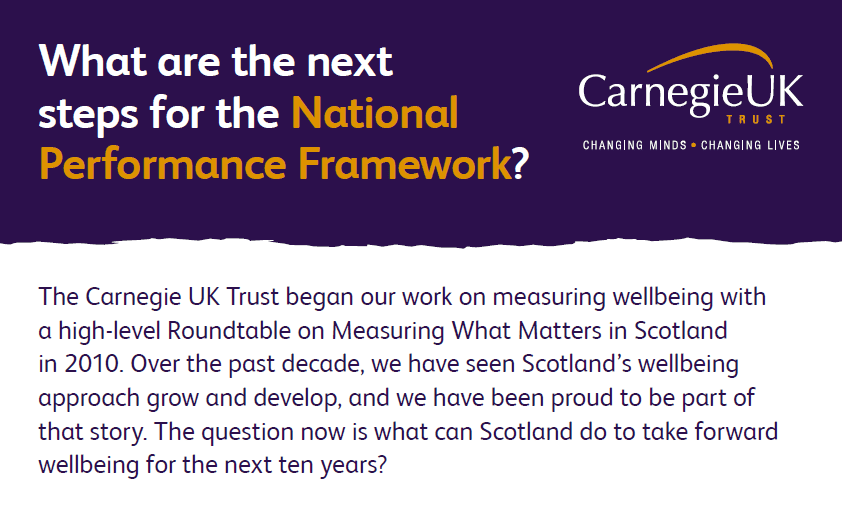 The Carnegie UK Trust began its work on measuring wellbeing with a high-level Roundtable on ‘Measuring What Matters in Scotland’ in 2010. They have continued to be closely involved in the development of Scotland’s wellbeing approach over the subsequent decade. In September this year, the Trust asked us to pause and consider how Scotland could take forward our wellbeing approach over the next ten years – making some specific recommendations for the National Performance Framework.

In this post, Jennifer Wallace and Hannah Ormston from the Trust, expand on that work and elaborate on those seven ‘Next steps for the National Performance Framework’.

When the National Performance Framework (NPF) was first imagined in 2007, it was intended to be internal document. It is not surprising that the name does not quite encapsulate all that the framework is today, and what it could be in the future. ‘National Performance’ does not tell us that the framework brings together all of the things that people in Scotland need to live well. Nor does it capture the intricately crafted and succinctly framed 11 National Outcomes that encourage people living in Scotland to build on what they do best: to work in partnership, together, for a better society now and in the future. As world-leading legislation that puts wellbeing at the centre of decision-making, the framework is something to be celebrated: now it needs a new name to match its bold and brave ambitions.

Alongside its focus on outcomes, the framework places a strong emphasis on prevention, intervention, integration and localism. These are the guiding principles of a wellbeing approach, which, for the Carnegie UK Trust, means everyone having what they need to live well. More than health and wealth, a wellbeing approach means making long-term considerations about the things that matter most to people and communities. It is about having friends and loved ones, about being able to contribute to society, and about having the ability to make choices about our own lives.

Scotland’s wellbeing approach is distinct because it recognises the value of kindness. We know that wellbeing is improved when communities are given opportunities to connect and feel belonging together, and when human relationships are at the heart of interactions with organisations and service providers. Kindness is a value intrinsic to the newest iteration of the framework, and our work has shown that it’s one of significance to people living in Scotland, too. This values based approach is an opportunity to connect with people more fully and meaningfully. Values transcend boundaries. They should be utilised as tools to communicate the ways of living and working expected in Scotland.

Having done the groundwork over a number of years, it’s also now time to link outcomes to the budget process. We know that service providers and community groups want greater clarity on how their work contributes towards the overall picture, and indeed which petal their project outcomes links to. We also know that it’s possible. The 2019 New Zealand budget recently led the way, highlighting New Zealand’s commitment to moving away from the traditional measurement of progress using GDP, to other areas of focus such as mental health and poverty. The wellbeing approach is an opportunity: it offers the Scottish Government a place to plan out and systematically map Scotland’s progress using a theory of change. Much has changed nationally since 2007, and so have perspectives on the framework. From productivity in its earlier iterations, to inclusive growth, to wellbeing. There is confusion caused by different terminology used over time but if these concepts are expressed as part of a theory of change, it will clarify their distinctiveness.

The National Performance Framework infographic has sparked imaginations within the voluntary and public sector. Whether you see it as a flower or a cog, the graphic has been widely used and can often be spotted on the walls of offices. The Scottish Government now needs to focus its energy on communicating to the public, and finding new methods of engagement which capture new audiences. The Ted Talk by the First Minister, as well as recent videos are a great starting point. We know that there are many brilliant examples of the visual communication of data out there, and more attention needs to be paid to communicating in innovative ways so that citizens can benefit.

This is all part of telling a coherent story, and one which represents the people that live and work in Scotland today. The National Performance Framework is full of numbers, but we know that it is much more than that. The Trusts wider work has demonstrated the power of collective storytelling. Whether it’s providing regular case studies with good practice examples, or asking people what the framework means to them, this could help to build a picture of why the National Performance Framework – Scotland’s Wellbeing Framework – is important.

So, the National Performance Framework needs to be kinder to itself. It needs a new name, and it needs to speak confidently and coherently to the public, private and voluntary sector, as well as the public. The framework is something to champion. Cog, flower, or framework – it needs to be nurtured, so that it can grow new leaves, roots and stand tall.

Prev Does the National Performance Framework mean anything to the third sector?
Next My experience of having a ‘Youth Voice in a Sustainable Democracy’

Scotland's National Performance Framework celebrates its fifteenth birthday. An update on progress and some next steps.