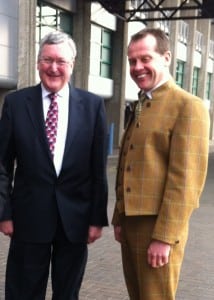 We’re now half way through Tourism Week, which winds up next Tuesday, and there has already been some very good work done to promote the industry.

Most of all, I’ve been impressed by the ambition and drive in the sector and that is is extremely important as we look to build on the success that we have already had in attracting visitors to Scotland.

The week is run by the Scottish Tourism Alliance and the work that has been put in by its leader Stephen Leckie so far has been phenomenal.

He was tearing around the opening conference on a Segway, gave an excellent speech at the formal dinner and found the time to attend the launch of the Conference Bid Fund – all in his trademark green tweed suit – which you can see in the photograph above.

The launch of the £2 million Conference Bid Fund on Thursday has been a highlight for me as it is something I have wanted to do since I took office last year. There is so much potential in business tourism and I hope this Fund will help venues across Scotland attract even more conferences.

The Bid Fund isn’t the only announcement I made this week. I also confirmed that The Scottish Government is also making £3 million pounds available through EventScotland for local events during Homecoming 2014. And on top of that, I lead a very interesting debate on the future of tourism in Parliament.

But we are not finsihed yet and I expect even more good news from the First Minister when he attends the Winning Years conference in Perth next Tuesday. It really is essential that we stand ready to make the most of the major opportunities that we have coming up for Scottish Tourism in the next few years, from the Year of Natural Scotland next year all the way through to the Ryder Cup and the Commonwealth Games in 2014.