January 31, 2018 by resas No Comments | Category Farming and rural

Total income from farming is estimated to have increased by £245 million in 2017, after a modest increase in 2016. 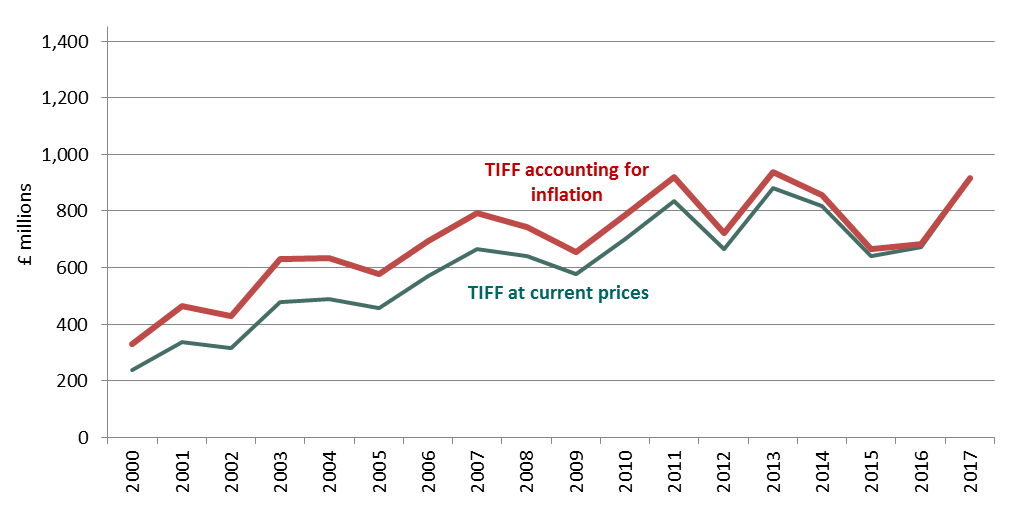 The Chief Statistician in the Scottish Government today published Total Income from Farming Estimates for Scotland 2015-2017, which contains near-final estimates of Total Income from Farming (TIFF) for 2016 and an initial estimate of 2017 TIFF. The figures show net income rose by five per cent in 2016 compared to the previous year, with initial estimates for 2017 suggesting a further increase of 36 per cent.

Agriculture was worth £672 million to the Scottish economy in 2016, up from £639 million in 2015, with improvements in potatoes and sheep farming offsetting the effect of the fall in milk price.

Although not all the data are yet in, TIFF for 2017 appears to risen to about £917 million, which, once inflation is taken into account, is the third highest since 2000. The dairy sector contributed most to the increase, with the average price of milk increasing 28 per cent to 28.2p per litre. A moderate increase in production resulted in the value of milk increasing £117 million to £434 million.

In the cereal sector, a ten per cent increase in the barley harvest, together with an improvement in prices, saw the value of barley increase £67 million, or 36 per cent, to £253 million. The value of wheat also rose on the back of good prices, to £128 million.

Overall, livestock is estimated to have seen a small increase in value in 2017. The largest sector, the beef industry, again remained reasonably steady in 2017, with prices slightly above 2016 throughout the year. Output from slaughter or sales of cattle amounted to an estimated £716 million in 2017. The sheep sector saw a second year of price rises, with output worth £222 million. Higher prices saw a 24 per cent rise in the value of pig meat, to £108 million, while the poultry sector saw a modest decline to £80 million. The value of eggs increased eight per cent to £89 million.

A good ware potato harvest offset depressed prices resulting in a four per cent increase in the value of potatoes, the seed sector remaining steady. The vegetable sector saw strong growth in both 2016 and 2016, and now stands at an estimated £155 million. Fruit, on the other hand, dropped back slightly in both years, and now stands at £134 million, though this is still well up on 2014.

In the longer term, income from farming has been rising steadily since a dip in the late nineties. However, within that trend the figures have fluctuated from year to year.

The publication also includes a range of related data. This includes comparisons with elsewhere in the UK, which show Scotland and Wales consistently below other areas, with Northern Ireland at similar levels to the lower performing English regions. Scottish regional estimates show that, on a per hectare basis, the highest level of income from farming was in the North East. Productivity indicators, which measure the amount of output per input, irrespective of prices, show improved productivity in four of the last five years.

Income from farming information is used to monitor the performance of the industry, but also as part of the calculation of Scottish GDP and in the UK National Accounts. The 2017 figures will be revised next year, once more complete data are available.