March 8, 2018 by resas No Comments | Category Farming and rural 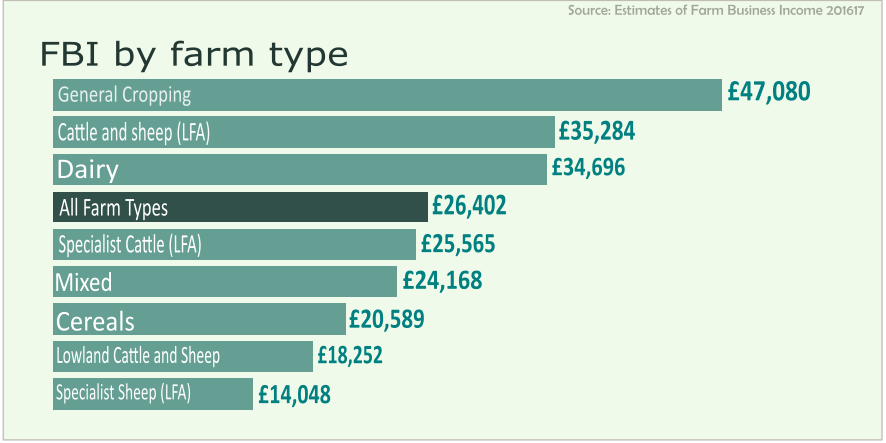 Incomes from commercial farms in Scotland have increased by around 94 per cent. This reverses the decline from the previous year, with incomes recovering to 2014 levels.

The latest figures were published today by Scotland’s chief statistician. They are based on annual audits of nearly 500 commercial farms in Scotland called the Farm Business Survey (FBS). The survey collects a range of data on the financial health of the farm using the farms accounts. This report focuses on the 2016 crop year.

The data is used to find out about the total income for unpaid labour, such as farmers and their spouses, who rely on the income from the farm. The survey only collects data on farms that are eligible for subsidies and does not include data from small farms or sectors such as pig and poultry farming which do not get additional funding.

Other findings from the analysis shows that farms spent less on raw materials and other inputs in 2016-17, such as cattle feed and labour costs, compared to the previous year. In contrast for outputs, such as revenue from livestock and crops, there was an improvement on the average output values across all farm types.

The reduced inputs and improved outputs combined with a five per cent rise in grants and subsidy payments from the EU, due to favourable exchange rate, led to an increase in the profitability of agriculture.

Farmers that have expanded from traditional agricultural work, such as renting out holidays homes or building small wind farms to generate electricity, did better than those farms that haven’t. Diversified farm incomes were around £17,400 higher compared to those that have focussed on normal farming activity.

Across all farms in the survey there has been an average increase in the farming income. The survey categorises farms into eight types such as dairy or crop farms and those in less favourable conditions for growing crops and holding livestock. General cropping farms had the highest average income for 2016-17 at £47,100, up around £15,700 from the previous year.

Dairy farms experienced the largest increase of average income. This increase in income was due to a decrease in inputs and a recovery in the value of dairy cattle. Income from milk remained fairly steady from the previous year due to the milk price remaining at approximately £0.21 per litre for farms in the survey.

Incomes from 45 per cent of farm businesses in the survey wouldn’t have been enough to meet the legal minimum agricultural wage for unpaid labour, which includes farmers, spouses and business partners.

Farm business income is the primary measure of farm level income in the UK but has only been calculated since 2009. A related measure, Net Farm Income, has a longer series and shows the average net farm income in 2016-17 recovered from the low in 2015-16, which was the lowest since 1991-92.

The average net worth of Scottish farm businesses is estimated at £1.3 million. The report also examines balance sheets from Scottish farms. These show that farm businesses are capital intensive and typically have high asset values which are not included in income measures. Average debt levels are fairly low with liabilities equal to ten per cent of the value of assets.

This report is used to inform, monitor and evaluate European, UK and Scottish agricultural policy. It does not include information on pig, poultry and horticulture sectors, which all exist without support from subsidies.

The figures released today were produced by statistical staff in accordance with professional standards set out in the Code of Practise for Official Statistics.