BlogsDigitalBetter Broadband for the Applecross Community

Better Broadband for the Applecross Community

A guest blog from Sandra Byrne, Community Broadband Scotland Adviser, about her involvement with the Applecross Community Company

As the Community Broadband Scotland (CBS) Adviser working with Applecross, I am delighted that on the 9th of August they became the first project to receive CBS Start-Up Fund assistance totalling £68, 520 (59% of project costs). However, I am very aware that this is just the beginning for the community. It is now time for the hard work of building the network and the commitment of getting on with running it. It is testament to the ambition, drive and commitment of Applecross Community Company (ACC) which has got them this far and it is this tenacity, I’m sure, which will drive the success of it.

In December 2012 they secured funding from the Lottery Village SOS fund and commissioned Rural Broadband Networks to undertake a design study and put in place a proof of concept from Broadford village hall. By the time I was in position in April they had completed Stage 1: Community Engagement and Stage 2: Project Planning and had everything in place to start working towards a business plan for capital assistance. I first met the group in April at CBS’ pioneering communities seminar in Aviemore. I was immediately impressed with how far ahead they were with planning their network. On leaving the seminar, I knew that I was going to have to hit the ground running, get up to speed with the project and understand how the CBS process would work in practice. 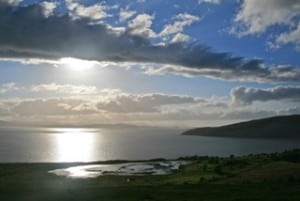 Summer was fast approaching and with the good weather came an urgency to get on with things. With the devil being in the detail, short term frustrations were overcome with a focus on the delivery of longer term gains. Care was given to make sure that all things had been considered and soon they were ready to submit their application for Start Up funding.

I worked closely with ACC offering support and guidance as they developed a robust business plan. CBS also helped them to access independent legal advice as well as producing a legal template to help facilitate negotiations with land owners. We will continue to offer on-hand support as they implement phase 2 and the running of their project.

Now funding has been awarded this is by no means the end of the journey. With the same verve and determination they are keen to push ahead and get everyone connected to a service that will underpin so much of their day to day lives. It is hoped that a fast reliable broadband network will gradually allow people to access new employment opportunities in Applecross. Allowing people brought up in the area to stay, some who have already left to return and new people to move for the first time. It also enables the community to provide better services and facilities for tourists, with an estimated 80,000 visiting the area each year. Faster broadband will also allow people to take advantage of on-line learning opportunities previously denied to them.

It will take a little longer before we can properly evaluate all the effects that this service will have on the community. I think few projects can offer such obvious and transformational impacts to individuals within a community but I am pleased to say that I have worked with one that does!

Digital Identity Scotland – Looking ahead to 2020

In this latest blog we hear an update from Lesley Allen, Strategic Lead, looking back on the past few months…