BlogsHealth and Social CareThe Buurtzorg model: Caring for each other with mutuality at the core

The Buurtzorg model: Caring for each other with mutuality at the core

In this blog post, Ian Mitchell talks about his recent visit to the Netherlands and his own personal experiences shadowing Buurtzorg Community Nurse, Thomas on his morning house visits in the local community.

I set off from the town square by traditional Dutch bike with Tom, a Buurtzorg Community Nurse. Not a hint of a breeze the empty streets had the feeling of a filmset with the crafted lampposts, pristine surfaces and quaint shops.

This was no movie. Tom had a steady stream of clients that morning as we picked our way out of town on the network of cycle paths. There seemed no-one who did not know Tom – many pleasantries were exchanged. 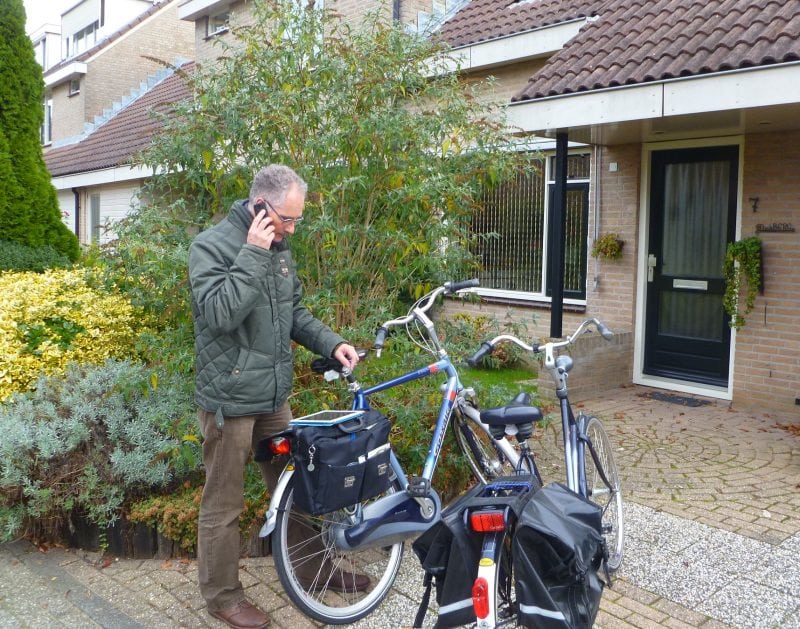 First house was Hamed’s: a Moroccan gentleman who was a diabetic and recently suffered from a stroke. Hamed was showered and given an insulin injection. Tom helped him with a recent change in prescription and using the Buurtzorg system on iPad was able to communicate with the GP and update patient notes for colleagues to see. Time for a cup of tea and a chat about the community centre Hamed attends and about a friend sadly departed.

Next house was a couple of streets away – Mrs de Vaister – 95 years old with breast cancer, heart disease and a diabetic. Utterly charming and sharp witted lady it was clear there was a special chemistry between community nurse and client. A wound was tended to, catheter changed and time to catch up on happenings around Mrs de Vaister’s family and neighbours. 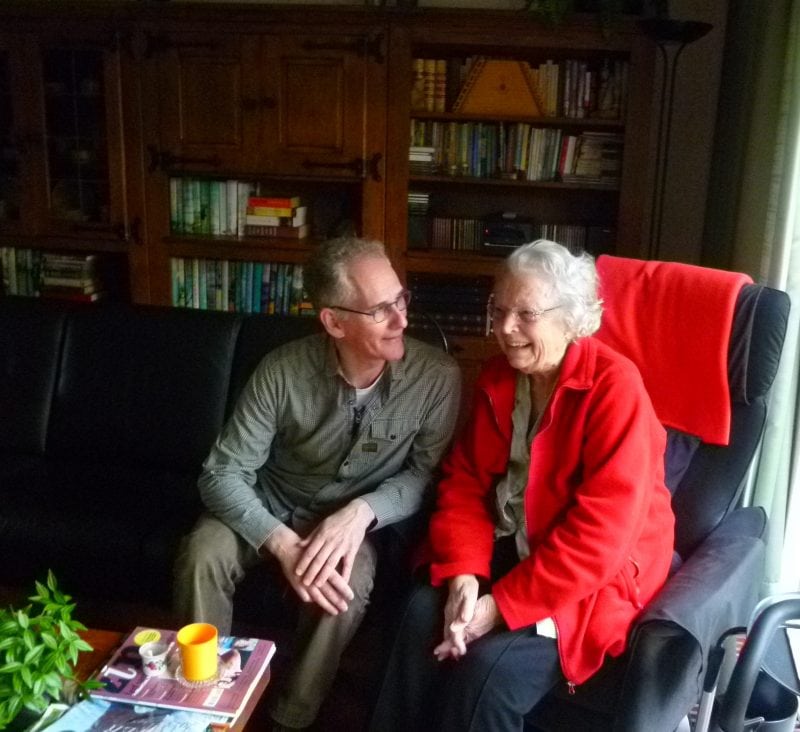 My lesson on route to the next visit was the meaning of the core Buurtzorg principle of ‘Mantelzorg’: caring for each other with mutuality at the core. The community nurse will not always be around hence the importance of a social network.

Tom and I arrived at the next house a few streets away. When the door opened it was clear Laura was upset – it had all been a bit much the night before. Husband Ron – an otherwise upright and fit looking man – has a rare neurological disease affecting motion and speech. Tom spent time listening and re-assuring Laura before showering and changing Ron. We then spent time over coffee and biscuits helping them select an appropriate wheelchair for Ron and giving advice and contact details on social support available to the family.

Now 9am, we had been on the go for just under 2 hours for three visits. The next house was Frank who has a psychiatric condition resulting in periodic delusions and a bladder tumor. Frank was physically able to look after himself. Tom spent time sitting with him talking through his feelings and explaining an adjustment in prescription. Another quick update on the iPad we were off on the bikes to a small hospice in the community. Run by volunteers, a two unit hospice with space for a Buurtzorg nurse to stay overnight. We spent some time with Joel who had a tumor in his esophagus. Again Tom spent some time asking about the condition and Frank’s well-being. Clearly very settled in his own flat Frank proudly displayed his latest bird wood carving.

As Tom headed off to his final visit of the morning I headed back to the town centre to reflect on a morning of neighbourhood care visits. Tom was one of 8 community nurses in the team who self organise themselves within a neighbourhood, in this case around 5,000 population. There are no senior or junior nurses, no managers, no rotas handed down – “you have to solve your own problems…you have to learn how to make good decisions” Tom had explained earlier in the morning. Of course this was not easy, there were times of disagreement. It may not be for everyone but Tom was very clear that this was “heaps better” than a top down hierarchy where he had previously worked as a nurse.

Tom is employed by Buurtzorg: a growing social enterprise and now employing close to 10,000 nurses across the Netherlands. There is no hierarchy. There are national Buurtzorg ‘coaches’ available to advise if necessary. Tom said this was of comfort in a situation where there may be disagreement but his group had rarely needed them for this.

Buurtzorg now have four nursing teams in Wijk bij Duurstede as their reputation has grown. (The town Wijk bij Duurstede has 23,000inhabitants, with 4 teams, in total 41 community nurses). They are more often than not the carer of choice for patients who use their health insurance. They have been employer of the year in the Netherlands for the past few years. Training and development is tailored to local need and circumstances. Skill mix and specialisms within the neighbourhood teams is dependent on what is required. Buurtzorg also have separate companies for example for home help services and can provide specialist nursing as required.

‘Was this what I had expected a trained nurse to do?’ Frankly no. On the morning of my visit, what I would have described as a clinical skills were not needed as frequently as I imagined. But was this a fair expectation? The other tasks such as showering were done with consummate professionalism while gently probing the patient on their feelings and with a focus on encouraging independence and self-help. Much of the time was spent with patient alongside the family or neighbour – getting to know them and their motivations, organising and networking them as required. Tom was highly organised and worked tirelessly for the entire morning covering six clients. But he never seemed rushed.

With trained nurses at the core of the Buurtzorg care – what initially may seem like a ‘more expensive’ option can also be delivered in less hours and is proven to keep people in their homes and rooted in their communities for longer. Tom’s professional nursing skills allied to his interpersonal skills help him anticipate – more often than not he stays ahead of the game and can call on a GP or a physiotherapist or arrange day treatment or a home help service – whatever it takes to avoid unnecessary institutional care.

Cycling back into the now bustling town square I asked myself:

“is the sort of care I would want for my family if in need?”. Yes I would be very happy with this. ‘Is this the sort of employment set up I would like to work within’? It had many positive features but I am not a nurse or a carer so I would have to leave that to others. But the enthusiasm from Tom alongside the thousands of nurses who have joined the Buurtzorg model of care in recent years would suggest it is certainly worthy of serious consideration.

Why is data so important for the National Care Service?

2023 and the National Care Service

2022 was an important year in progressing the National Care Service (NCS). It was the year where we were able…

What we learned from the National Care Service Forum 2022

On the 3 October this year we held our first ever National Care Service Forum. It brought together the people…