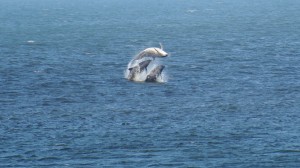 It seems more than the sun came out to play in Aberdeen yesterday!

Whilst out taking some pictures near the Marine Laboratory, Mhairi Sinclair and Keith Mutch from our Communications Team saw at least five dolphins larking around near the lighthouse.
The Comms colleagues got some great pictures – come and have a look at our Flickr site.