BlogsOpen Government PartnershipGetting down to the nitty gritty: government and civil society working together

Getting down to the nitty gritty: government and civil society working together 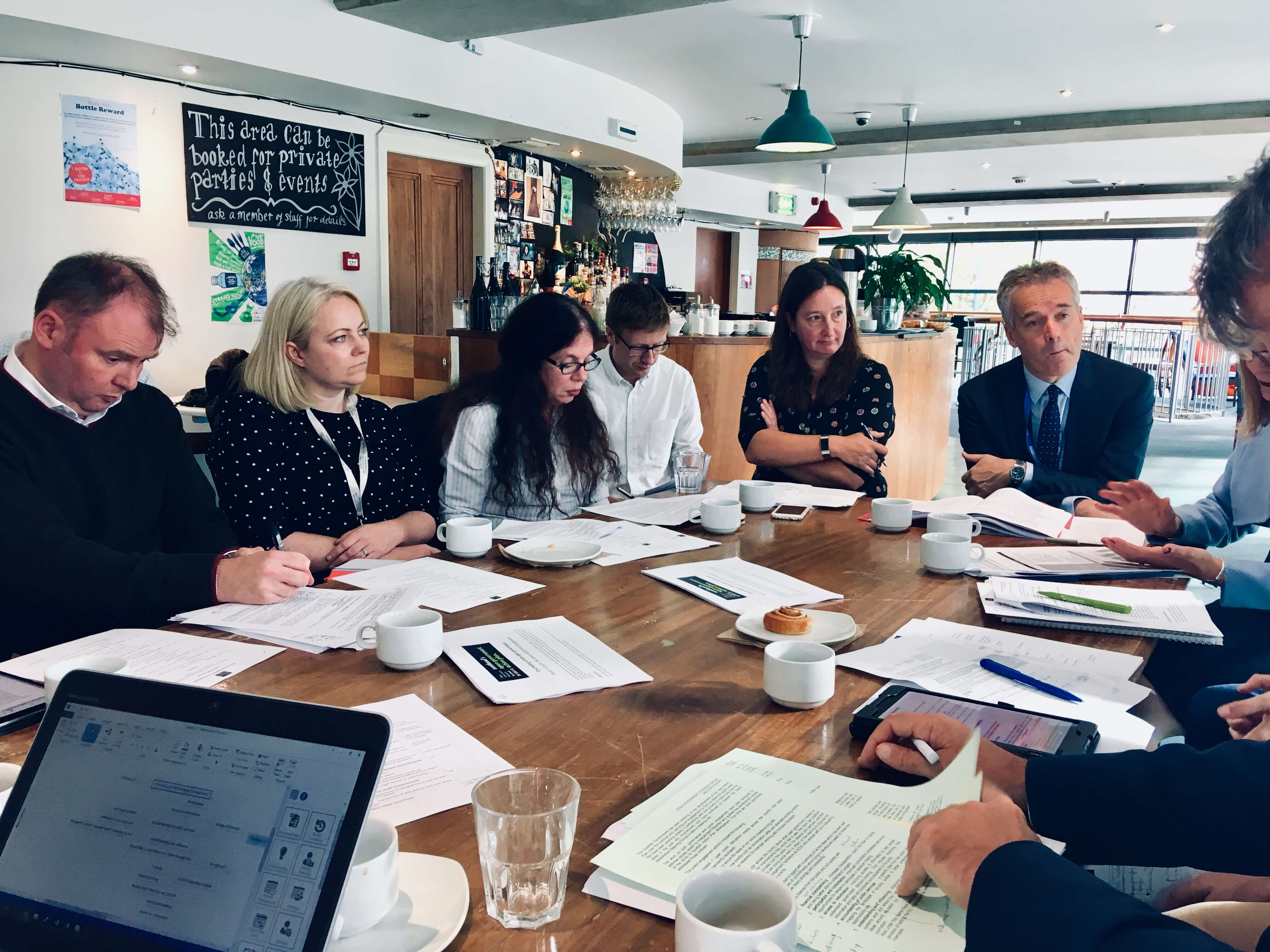 The second meeting of the representatives from Government and civil society saw the members gathered round a table in a café. They were rolling up  their sleeves and working hard – having a positive and constructive conversation about the actions needed to make Scotland’s governments and systems more open and accessible to the people.

It’s not uncommon to see civil servants, ministers and representatives of civil society in a room together. But what is unusual is bringing these types together as a formalised partnership. The Open Government Steering Group is made up of equal numbers of members, who together have oversight of the development and delivery of a number of actions to help improve openness, transprancy and participation in Scotland. They help create the actions that the Scottish Government is commited to doing. They also help to think about the strategic direction for open government in Scotland.

In an effort to try something different, they met in a café in Edinburgh, a relaxed atmosphere and open to the public to observe the discussion. We try to be as open and transparent in all our work – including writing this blog-post! As they cosied in around a table to work through the draft commitments, it was already obvious that this meeting was going to be different. In what felt like a real sense of partnership, they constructively worked together to think about how these actions could be improved and how they might offer to help.

It feels like the beginning of a strong working relationship between government and civil society which carries and delivers a transformative programme of change in openness in Scotland.

Word document version for accessibility: Note of Meeting – OGP Steering Group – 4 Oct 2018 – final (word doc).
Please let us know if you would like this in another format.

This document includes the attendee list, agenda and a paper with the draft commitments, as circulated to members prior to the meeting.

This note is also published on the Scottish Government official website, on the dedicated page for the Steering Group: gov.scot/groups/open-government-partnership-steering-group  This page also contains a list of all members. 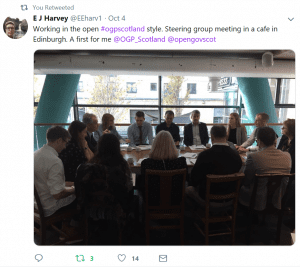 The group is co-chaired by representatives from both government and civil society.  This meeting was chaired by Colin Cook, Director Digital deputising for Michael Russell, Cabinet Secretary for Government Business and Constitutional Relations, and Lucy McTernan, representing the Open Government Partnership (OGP) civil society network.

Everyone was welcomed and congratulations were given to Lucy McTernan for her recent appointment to the Global Open Government Steering Committee. Mr Russell was unable to attend the meeting, so apologies were given for his absence.

The purpose of the second meeting of the group was to consider the draft commitments as prepared by government. It was a chance for the representatives of civil society (organisations, third sector, citizens) to give feedback. They were asked to help shape the overall direction of the Action Plan, before it’s sent to the Scottish Cabinet (the Ministers) for their approval. We’ll then publish the official Action Plan in November. This Action Plan will include actions to be delivered by the 2020. 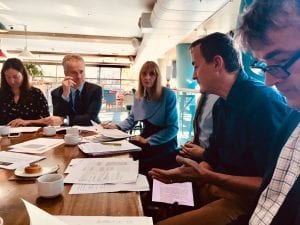 The group agreed that the themes from public discussions felt right. They then agreed that these should rightly be the basis for the actions.  Papers that were sent in advance (link above);  included draft commitments from the Scottish Government. These were developed from the ideas and themes we heard from the public. Asking the group for their opinions and to help make these better is one of the most important parts of the open government process. To help with this discussion,  the group was asked to consider the following questions:

The group discussed each draft actions in turn to provide feedback and comments. The OGP Secretariat gave further detail on the commitments to add to the outline which was given as a short summary in the circulated papers. You can read them in the paper above ^^

The draft commitments are detailed in full in the papers for the meeting as above. For a quick summary, the 5 commitments focus on the following themes: 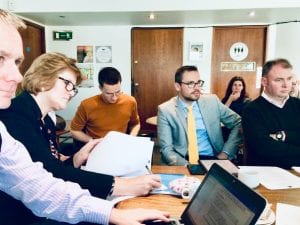 The group agreed pairings of government and civil society to take forward discussions on potential commitments. At the Scottish Government, we’re working on re-drafting the commitments and actions to incorporate and build on the challenges from the group. We are working with the policy teams internally to the government and civil society to do this.

We (the Secretariat) aim to publish updates on the discussions and changes. We are finalising the commitments in the next few weeks. We want to try keep this process open as possible whilst being able to be efficient, keeping track of versions and developments.

The Action Plan will be submitted to Cabinet for approval at the end of October, or early November subject to Cabinet timelines, publication and time taken for finalising the commitments. The Steering Group will be updated if there is any cause for changes to scheduled timeline. 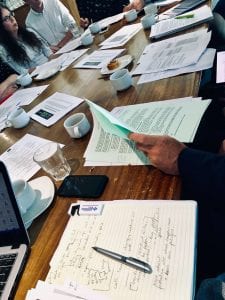 Future meetings and get involved

The rest of the meetings for the year will take place in February and May 2019. This group try to meet 3-4 times a year while the plan is being delivered. These meetings will all take place in the open: we will try either a live stream in future or provide some visual output from these meetings (videos coming shortly!) alongside a note of what has been discussed. Anyone is welcome to attend as an observer and all papers and locations of upcoming meetings will be shared in advance.

Got comments or questions?

We welcome comment on this meeting note  – let us know if there’s something you’d like to see more or if you have any questions. Thanks for reading.

Prev What we heard: report of public discussion on future of openness
Next Coming soon! Action plan on open government