To some people the term ‘rural economy’ conjures up images of sleepy, traditional industries, where very little changes from one generation to the next. In reality, the rural economy is vibrant, diverse, and changing all the time. My job is to build on that vibrancy, and encourage more diversity, to help grow that economy and bolster Scotland’s rural population.

In order to achieve those aims, it’s imperative that the Scottish Government understands the makeup of the rural economy, which means gathering accurate and up-to-date information. To that end we have produced a ‘Working Paper’, which sets out our current understanding of the Scottish rural economy: capturing information on household and employment data, as well as identifying key challenges, such as broadband services and fuel poverty.

In order to better understand the data, we also developed a new, more in-depth classification system, which divides the country by its rural or urban characteristics rather than by geographic, or local authority boundaries*. 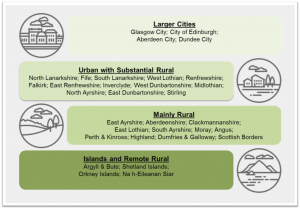 In contrast with the common perception of the economy of Rural Scotland as dominated by agriculture and estates, the report also highlights that the traditional rural industries of ‘Agriculture, Fisheries and Forestry’ account for just 4% of the GVA in Islands and Remote Scotland, and 3% in Mainly Rural Scotland. This makes ‘Agriculture, Fisheries and Forestry’ one of the three smallest sectors in the rural economy in terms of GVA. Whereas, across Scotland as a whole, these industries account for 1.3% of the GVA. By comparison the Public Administration accounts for (23%) and ‘Distribution, Wholesale and Retail’ represents (19%) of the Scottish Economy as a whole.

In terms of Scotland’s overall GVA growth, the story is a positive one, with substantial growth since 2007. That growth has been highest in Mainly Rural Scotland. The fastest growing sector in the rural economy is ‘Business Services’ (up by 169 %) and ‘Others’ (up by 148%) – which includes ‘Arts’, ‘Entertainment and Recreation’, ‘Household’, and ‘Other Service Activities’. In the Islands and Remote Rural Scotland, growth rates are highest in Construction (up by 131%) and second highest in Information and Communications (up by 116%). 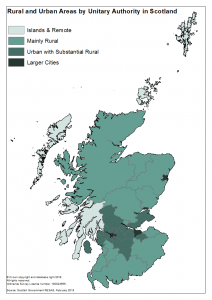 The paper also investigates employment, self-employment, and wages. One discouraging aspect of the report is that – based on hourly wages – women living in Remote Rural Scotland appear to have the lowest annual income of any group, and the largest median Gender Pay gap – being at £5,076.

This is a problem that the Scottish Government has been working hard to address and, last year, we launched the ground-breaking ‘Women in Agriculture Taskforce’, which I co-chair. The taskforce’s aim is to champion better representation for women in that sector by encouraging better succession planning, and better access to training and progression, amongst other things.

Another finding is that levels of employment, and patterns of employment are different in Scotland’s rural and urban areas: unemployment is lower in rural areas, and there are more people working part-time or self-employed in those areas as well.

And it is no surprise to see that small businesses employ more than two-thirds (68%) of private sector employees in Scotland’s remote rural areas. That compares with just 32% employed by SMEs in the rest of Scotland.

So this new data tells us that Scotland’s rural economy is growing at a steady rate, with more notable growth in industries like communications, the arts and recreation. It also tells outlines the vital importance of small businesses to those parts of the Country, and highlights a few areas where improvement needs to be – and in many cases is being – made.

* This paper divides Scotland’s local authorities into four categories, and then uses Gross Value Added data to tell a story about what Scotland’s rural economy looks like. This replaces the Randall Classification (1985), which divided Scotland’s local authorities in two, and which in is now seen as out of date. The two most rural categories are: Islands and Remote, and Mainly Rural. The remaining two categories are Urban with Substantial Rural and Larger Cities.

We developed this classification because economic data is generally only available at local authority level, and so was not suitable for use with Scotland’s main Urban-Rural Classification; which remains the gold standard for our geographic data.

The report can be viewed here.

Prev Success for Ulva
Next Preparing for Pass it On Week

Climate Change Secretary Roseanna Cunningham discusses Climate Week 2020, an opportunity for us to focus on Scotland’s green recovery from…