This week on Greener: Climate Conversations, Nature Conservations and more

Rural Economy Secretary Fergus Ewing has written to the newly appointed UK Secretary of State Theresa Villiers calling on her to ensure that iconic Scottish food and drink products continue to have the necessary protections in place in the EU – deal or no deal.

The UK Government has previously indicated that Geographical Indications will maintain their protected status in Europe and associated territories regardless of the UK leaving the EU, albeit those assurances have been contradicted by DEFRA’s own guidance.

Geographical Indications are used to promote and protect the names of quality agricultural products and foodstuffs, such as Scotch Whisky, Scottish Farmed Salmon and, most recently, Ayrshire Earlies. 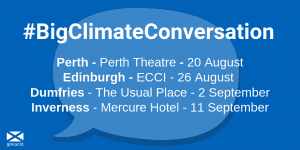 The dates and locations of the new Big Climate Conversations are as follows:

Find out more and book a place

The key aim of the NCO is to prevent rare vertebrate fossils from being damaged through irresponsible collection and removal from Skye’s globally important fossil sites. Importantly, the NCO aims to encourage local people and the wider public to take an interest in and report any potentially important fossil finds.

“Skye lays claim to the most significant dinosaur discoveries of Scotland’s Jurassic past and this Nature Conservation Order is a vital step in protecting and preserving this important part of our natural heritage for future generations.

“The Order gives extra legal protection to these special sites whilst providing for important artefacts to be collected responsibly for science and public exhibition, as Dugald Ross of the Staffin Museum has been doing since his first important discovery in 1982.

“I hope the Order gives even greater awareness of the significance of these important sites, and the important and valuable role everyone has in helping protect them.” 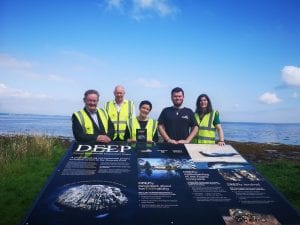 In the news: Land use report

You may have seen coverage in the media around the UK Committee on Climate Change’s latest report into Land Use.…

In the news: Circular Economy Bill