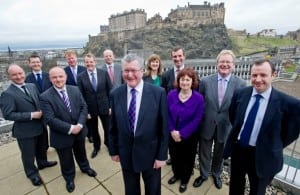 I was delighted to meet with members of the Edinburgh Green Investment Bank Group today, ahead of opening the debate in Parliament in support of the bid.

Edinburgh is the only location in the UK which brings together both finance and the clean energy industry in a single location. It has an unrivalled concentration of industry skills and experience.

Locating the Green Investment Bank in Edinburgh will ensure the best possible chance for the UK to develop as the European centre of excellence in this sector.

I have written to the Vince Cable in support of the bid, and energy spokespeople from all the political parties signed a cross party letter of support at the end of last year.

Edinburgh and Glasgow councils joined forces to write to Dr Cable together in support of Edinburgh’s bid last year, alongside the Energy Technology Partnership, which represents universities all over Scotland.

We expect a decision on the location of the bank by the end of the month – and I believe Edinburgh offers the best possibilities in view of the criteria set out by the UK Government.