Land Reform and community engagement are key Scottish Government priorities – where policy and the desire for change often overlap.

The policy and legislative climate has changed with the 2016 Land Reform Act, and with the 2015 Community Empowerment Act that preceded it. Scottish Government Research has helped to inform these developments and will continue to shape the implementation of these transformational pieces of legislation.

We often talk of land reform as a journey. Our destination in this is clear – enabling communities and individuals to own and use land to realise their full potential – and while we know our preferred destination, we are still working out how to get there.

Engaging communities in the most effective way possible is clearly of paramount importance. The borderline between land reform on the one hand and community empowerment and engagement on the other is narrow. The legislation that affects one almost always affects the other.

And this doesn’t just mean the countryside. Whereas earlier land reform initiatives in particular have been almost exclusively focused on rural Scotland, the latest round of land reform, community engagement work and funding will benefit urban areas just as much.

It’s within this context that we publish the results of four separate research projects, two on land reform and two on community engagement.

This research looks at four different but related issues:

The largest and most complex of these projects is the diversity of ownership report by a large interdisciplinary team led by Scotland’s Rural College (SRUC). This compares large estates that have remained intact over the past century and estates that have been broken up into smaller units and farmed or managed in much smaller units.

The research was unique in taking a long-term look at the issues. It showed that the picture is fundamentally complex, and that the scale of ownership is not the main determining factor in whether a community is successful. It did find that there were small positive effects on both agricultural intensity and population growth in areas with diversified ownership. However, it showed that there are a range of factors – such as proximity to successful urban centres – and that diversity of ownership is one factor among many.

The Scottish Land Fund evaluation was carried out internally, making use of figures from the Big Lottery Fund Scotland and Highlands and Islands Enterprise, which administers the fund. It showed clearly how the Scottish Land Fund has help to fund community ownership. The research helps us to understand how the process is working in practice and to show how much the Scottish Government has committed to this process over the last few years across all relevant funds (as in the chart below). It also identified eight clear recommendations, such as looking more at revenue support for projects, along with capital funding, and identifying a need for better guidance for decision makers in awarding SLF funding to communities. 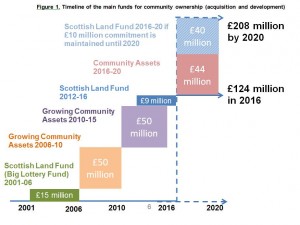 The good practice report was produced by the James Hutton Institute as a part of the Strategic Research Programme. . It looked at how conflict between community groups and landowners can be overcome. It identifies clear good practice ideas for both communities and landowners, including clarity of intention, seeking engagement with the landowners. It also identified key success factors in building these kinds of relationships, pointing specifically to working in a spirit of openness and trying to seek partnerships or common cause. Where there is unavoidable conflict it suggests using mediation with an ‘honest broker’.

The good practice principles which are here: http://www.gov.scot/Publications/2016/07/7298 make clear that key to success on the landowner side include:

The Engaging Communities report looked widely across Scotland to try and identify what approaches were being taken by public bodies to ensure engagement with rural communities were being engaged. The report was built on a framework showing how communities can be involved in decision-making and service delivery as it affects them. The framework sets out three simple possibilities for sharing decision making, but then expands that to consider the options for shared implementation and service delivery.

The report sets out a nuanced nine-part understanding which looks at who has the responsibility­ for decision-making, and how that relates to implementation of the decisions made. These findings point to how we can develop in future to improve public bodies’ engagement with community groups, helping them to work better together. The research was jointly commissioned for the CAMERAS partnership by the Scottish Government with financial support from Scottish Natural Heritage and Forestry Commission Scotland. A technical report on Empowering Communities Research was also published.

The reports are all published today.