September 13, 2017 by resas No Comments | Category Economy, Farming and rural

The total outstanding bank debt of Scottish farms increased five per cent over the past year, according to the latest statistics.

A survey of the main banks and other lending institutions showed outstanding loans to Scottish farms rose by £113 million in the year to May 31, 2017. Total outstanding loans to the agricultural sector amounted to £2.32 billion.  Accounting for inflation, this was an increase of three per cent since May 2016. 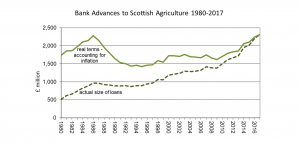 This was the eighth consecutive annual increase in Scottish farm bank debt. After remaining steady for a decade during the 2000s, debt levels have now risen to their highest since records began in 1972.

In addition to bank loans, farms have an estimated £1.1 billion of liabilities, related to hire purchase, family loans and other sources. About 50 per cent of total liabilities are long term loans, a percentage that has been slowly increasing over time. In 2003 about 40 per cent of debt was long term. Liabilities equate to about eight per cent of assets.

The data reflect the overall UK picture. Figures from the Bank of England showed that, by May 2017, the UK “agricultural, hunting and forestry” sector had an outstanding debt of £18.5 billion, having seen a 57 per cent increase in debt levels since 2010. The only two other business sectors that had seen an increase since 2010 was utilities, which increased 63 per cent, and wholesale and retail at eight per cent.

The full publication can be accessed at http://gov.scot/stats/bulletins/01292

Beginning next month, my unit is stepping up work on our ‘Agricultural Statistics Transformation Programme’. I previously spoke about the…