October 4, 2018 by resas No Comments | Category Economy, Farming and rural

Both the area of cereals grown and the yield in Scotland are likely to fall, leading to a decline in production for 2018. This is, in large, due to the poor weather conditions experienced in early 2018.

Around 420,000 hectares of cereals are estimated to have been grown this year, three per cent lower than 2017. This drop in area, combined with an estimated six per cent decrease in yield, is leading to predictions of a nine per drop in production. 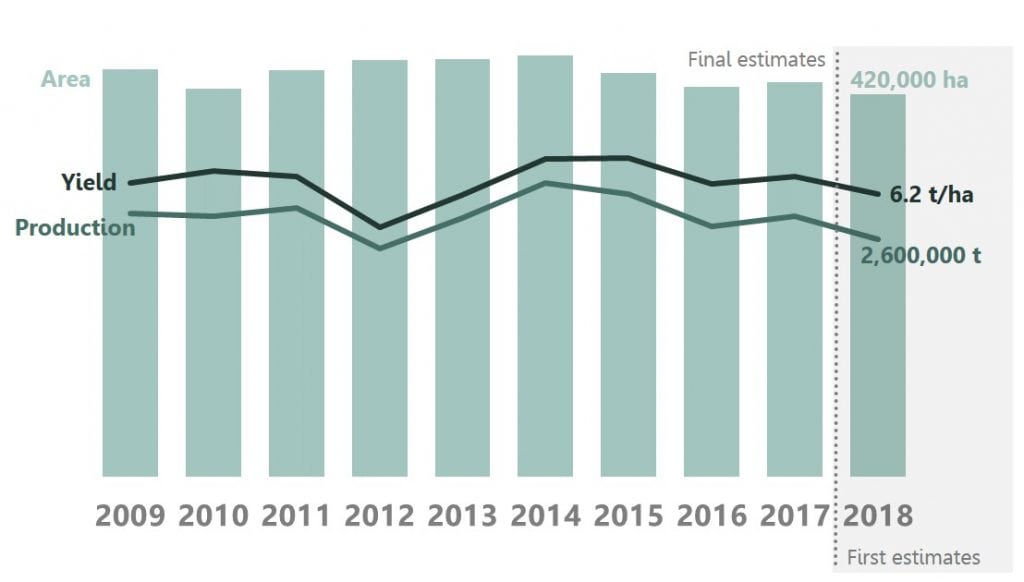 The first estimates of the 2018 Scottish cereal and oilseed rape harvest were published today by Scotland’s Chief Statistician. The statistics show that 2018 was a difficult year with unfavourable weather conditions experienced in winter 2017 and spring and early summer. However, crops that were sown later in spring have generally done better than those sown earlier.

Spring barley, Scotland’s most important cereal crop, is expected to see a fall in yield of around 10 per cent compared to the previous year and production will fall by seven per cent. This is mainly attributed to the poor performance of spring barley sown earlier in the year.

However, winter barley yields are expected to rise slightly, and the quality of winter barley has been good this year which has helped. But production is estimated to fall by around 18 per cent because of a predicted decrease in area sown, which was a result of the difficult weather conditions in late 2017.

Other estimates for crops such as wheat, oats and oilseed rape are estimated to have performed similarly or slightly fallen compared to 2017, affecting yields, areas and production. Overall, this has led statisticians to anticipate an overall drop in total cereal production of around 2.6 million tonnes.

The figures released today were produced by independent statistical staff in accordance with professional standards set out in the Code of Practice for Official Statistics.