October 9, 2018 by resas No Comments | Category Farming and rural

Poor weather affected the output of Scottish agriculture over the past year. Sheep and cattle numbers fell and there were reductions in the areas of cereals and potatoes. However, the area of soft fruit, which is less dependent on weather conditions, has seen an increase.

The snow storm in the spring affected sheep numbers, which fell to a five year low. The total sheep count dropped by six per cent or 392,000, with lamb numbers falling by eight per cent. The number of breeding ewes also decreased, by four per cent. Cattle numbers have followed a similar trend and are down to 1.76 million, continuing a long term decline since the 1970s. Both dairy and beef numbers were down slightly.

The Scottish Government’s Chief Statistician released the results from the June 2018 Agricultural Census which also highlighted the difficult growing conditions the cereal sector faced due to adverse weather. The data shows the total area of cereals in Scotland dropped by three per cent or 12,900 hectares.

The area of barley, which is Scotland’s biggest crop, fell by one per cent or 3,300 hectares. It has been a similar picture for wheat (nine per cent) and oats (two per cent). However, rye continued to rise with an increase of 6 per cent. This is still a minor crop with 5,800 hectares planted.

The statistics also showed an estimated increase in poultry numbers of two percent to 14.5 million chickens. This meant an increase of four per cent in birds used for meat production (called broilers), yet for the second year in a row the number of egg-laying birds outnumbered broilers.

In addition to these statistics, the number of people estimated to be working in agriculture has decreased by 400 to 66,600.

Rented agricultural land has also fallen to around 22 per cent, its first noticeable drop since 2014. There were over 11,000 hectares of land rented under the new Modern Limited Duration Tenancy (MLDT) arrangements.

Agriculture continues to dominate the Scottish landscape with around 80 per cent of the area used for farming and agriculture related activity, with a total of 51,200 agricultural holdings. 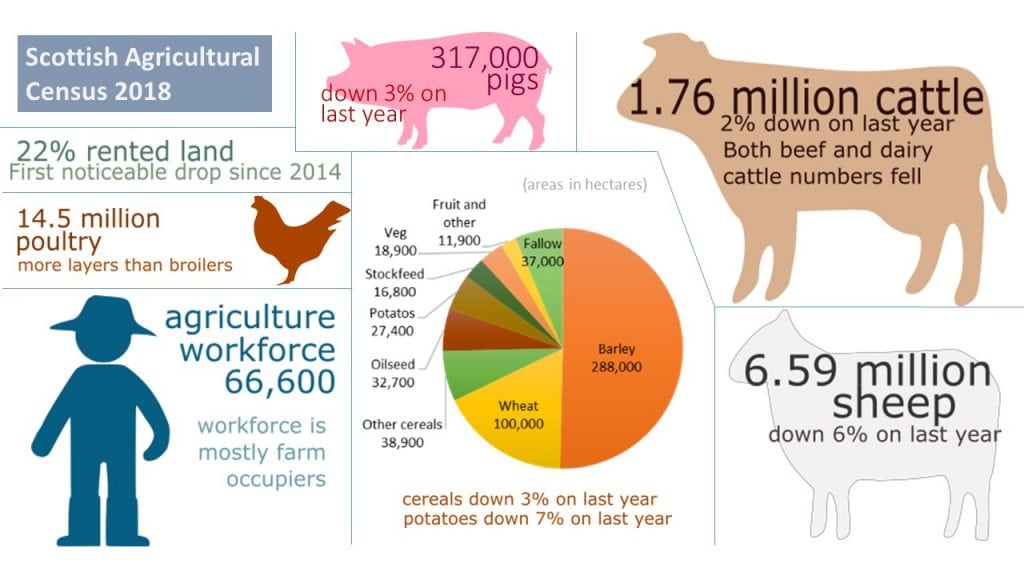