BlogsStatisticsCereal harvest in 2018 affected by weather

Cereal harvest in 2018 affected by weather

December 12, 2018 by resas No Comments | Category Farming and rural

Cereal production and the area of cereals grown have decreased in 2018. Final estimates for the 2018 cereal and oilseed rape harvest were released today.

Around 420,000 hectares of cereals have been grown this year, three per cent lower than 2017. This drop in area, combined with a nine per cent decrease in yield, led to a 12 per drop in production, to 2.5 million tonnes.

This was due to the unfavourable weather conditions experienced in winter 2017, as well as spring and early summer of 2018. It has been particularly bad for barley and wheat crops, which resulted in a number of farmers choosing to whole-crop due to the low yield and quality.

Winter barley was also affected by the poor weather, with area dropping by a fifth. This, along with a four per cent drop in yield resulted in production decreasing by a 24 per cent. This was the lowest production tonnage since 1993 and the lowest area since records started in 1982.

Wheat production has decreased, due to area grown decreasing by nine per cent and the yield decreasing by 16 per cent. Oats and oilseed rape also seen reductions in area, yield and production over the last year.

Final estimates of the Scottish Cereal and Oilseed Rape Harvest are based on final yield results from the 2018 Cereal Production Survey. These are combined with final crop areas from the 2018 June census to produce production totals.

The figures released today were produced by independent statistical staff in accordance with professional standards set out in the Code of Practice for Official Statistics. 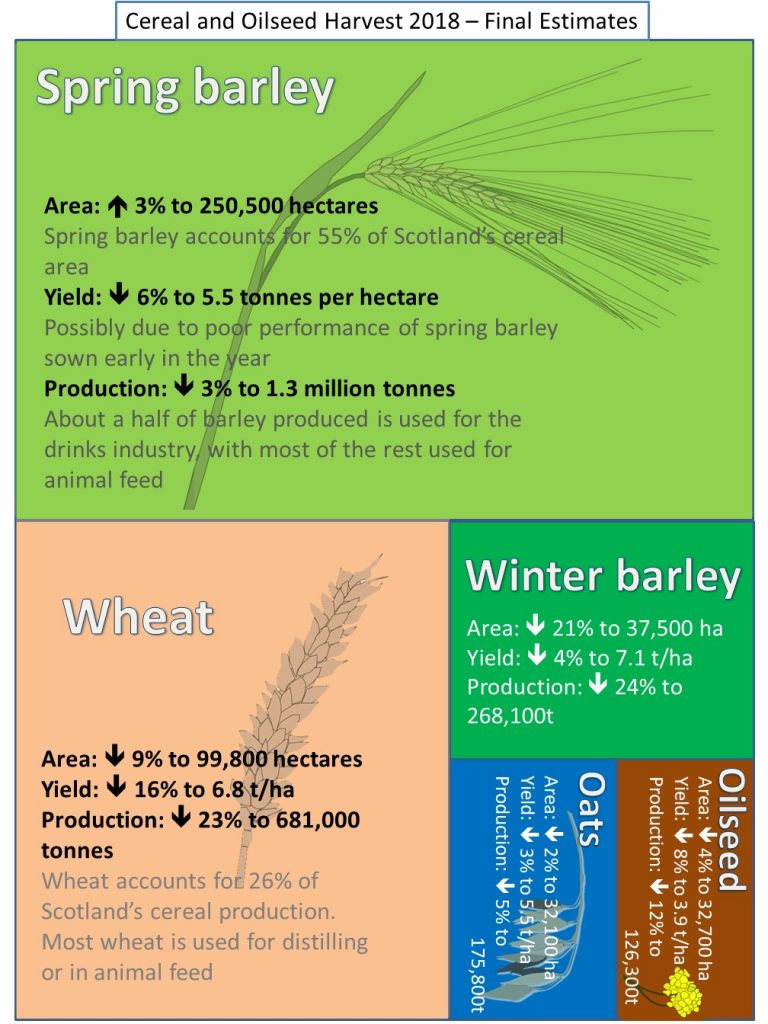 Prev Considering both physical and mental health
Next There were 547,691 acres in community ownership at the end of 2017

Following a busy autumn, the Scottish Government’s Equality Analysis team would like to update on progress towards the development of…