March 26, 2019 by resas No Comments | Category Farming and rural

Incomes from commercial farms in Scotland have gone up in 2017-18, however the latest annual figures shows that agriculture is still dependent on farm subsidies. The average farm income has risen 19 per cent to £35,400, the highest level over the last six years.
This upward trend from the previous year shows that the industry is continuing to recover from the low average income of £16,800 in 2015-16. Dairy farms experienced the largest increase of average income at £73,100. This increase in income was largely due to a 22 per cent increase in the average price of milk, to £0.28 per litre. 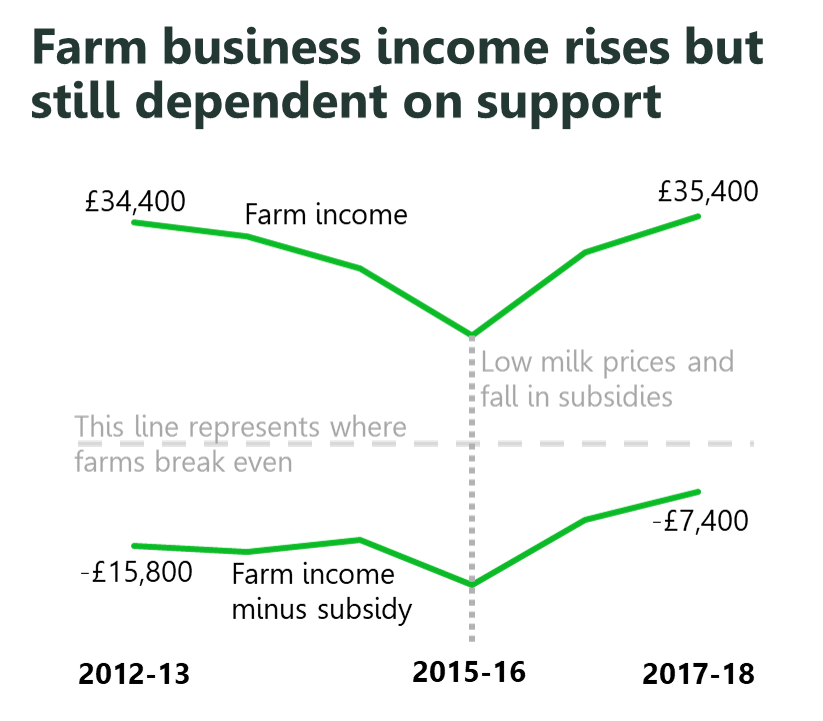 Subsidy payments from the EU play an important role in farm incomes. Over 60 per cent of farms in the survey were making a loss without subsidy, with the average business making a loss of £7,400 without support.

Contract farming and diversification have helped offset losses from farming activity. Farms that had expanded beyond traditional agricultural work, such as renting out buildings, had incomes that were around £19,600 higher compared to those that have not diversified.
However, for farms where diversification opportunities are reduced, such as sheep farms and beef farms in Less Favoured Areas (LFA), they continue the historical trend of having the lowest incomes. For these farms subsidies play an important role and are estimated to be making a loss of £27,400 without support.

There was an increase in the percentage of farms that could pay unpaid labour more than the minimum agricultural wage (MAW). Incomes from 60 per cent of farm businesses in the survey were able to pay the minimum agricultural wage or more to unpaid labour.
The average net worth of Scottish farm businesses is estimated at £1.3 million. The amount of assets held by farms has decreased slightly over the previous three years, while the amount of debt has risen slightly. However, the average debt levels are fairly low with liabilities equal to 12 per cent of the value of assets, indicating no immediate concerns with the rising levels of debt.
More detailed analysis and commentary, as well as additional charts and reference tables, are available in the publication.

The full publication can be accessed via the link below.