March 12, 2019 by resas No Comments | Category Farming and rural

The weather in 2018 has caused mixed fortunes in agriculture. Mild weather at the end of 2018 helped increase the area of winter-planted crops and the warm summer led to more production of hay. However the weather appears to have had a mixed effect on livestock farming.

Better weather at the end of 2018 led to improvements in the total amount of winter-planted crops. Total area of winter crops is two per cent higher than the ten-year average, estimated at around 197,000 hectares. Wheat remains Scotland’s biggest winter crop. The area grown has increased by 12 per cent compared to the previous year and it is a similar picture for barley and oats.

The summer conditions helped hay production which was slightly up on the previous year. However, despite a 17 per cent increase in the area of grass sown during the year, the dry weather slowed grass growth which resulted in silage and haylage production falling slightly to 6.8 million tonnes.

The Scottish Government’s Chief Statistician has released the results from the December 2018 Agricultural Survey which also looked at sheep numbers. The report highlights numbers remained stable at around 4.95 million but as lamb numbers rose and combined with the drop in lambs being born, it suggests farmers had difficulty getting lambs ready for slaughter.

Cattle numbers continue a long-term decline. Total cattle numbers fell by two percent to 1.66 million. Both dairy and beef numbers were down slightly.

There were gains in the poultry sector of both ‘broilers’, birds reared for meat production, and ‘layers’ used for egg production. This resulted in an increase of around three per cent to 14.7 million poultry in 2018.

Renting agricultural land has gone up over the past year with average rents now around £40 per hectare. Less Favourable Area (LFA) land, used mostly for grazing livestock, rose three per cent to £27 per hectare. Prime non-LFA land fell one per cent to £133 per hectare. Eastern Scotland still has the highest median rents while the lowest is found in the Highlands and Islands. 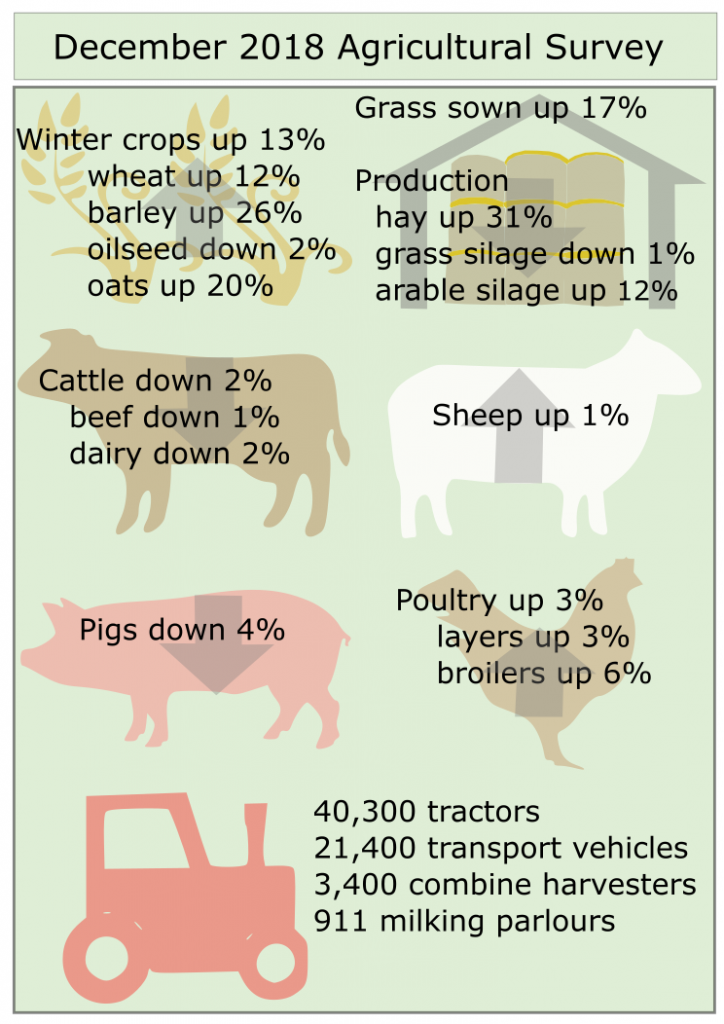 Prev There were 547,691 acres in community ownership at the end of 2017
Next Scottish Farm Business Income at six year high