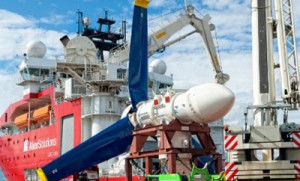 On 16th September 2013, the Minister for Energy, Enterprise & Tourism Fergus Ewing announced that he had awarded consent under Section 36 of the Electricity Act 1989 to MeyGen Limited to construct and operate a tidal array situated in the Inner Sound of the Pentland Firth. The first phase of the development has a total generating capacity of 86 MW and will be constructed in stages to allow extensive monitoring of the turbines and their interactions with the environment which will be used to inform future stages of development.

The consent included a number of conditions including one which permits subsequent stages of development to be constructed only after appropriate monitoring has been carried out. Other conditions of the consent include the development and implementation of a Environmental Management Plan, a Vessel Management Plan, a Project Environmental Monitoring Programme and the establishment of an Advisory Group which will oversee and provide advice on the plans.

The first stage of the development is to be no more than six turbines as assessments undertaken by the company and advisors including Scottish Natural Heritage and Marine Scotland Science predicted that a deployment of more than six turbines would lead to an adverse impact on the current harbour seal population within the Orkney and North Coast Management Unit. By limiting the initial stage of deployment to six turbines these predicted impacts can be avoided and the aforementioned monitoring programme will seek to monitor the interactions between the turbines and Harbour seals as well as other key receptors.

The 86 MW development is the first phase in the Meygen project which the company hopes will eventually be capable of generating approximately 400 MW.

The full submission to the Minister can be read here.