Marine Scotland Science has published findings of a study looking at the behaviour of homeward migrating salmon in the ICES Journal of Marine Science.

The study is part of a research programme, funded by the Scottish Government, which aims to identify and minimise any disruptions to wildlife as the marine renewable energy industry develops.Using coastal nets on the Northern coast of Scotland, 50 large salmon were captured as they returned to their home rivers to spawn. They were fitted with data recording tags that logged depth, temperature and light levels at frequent intervals and were programmed to detach from the fish during a period of 10 days and float to the surface. The tags then relayed their locations, and the recorded data, via satellite, to the Freshwater Fisheries Laboratory at Pitlochry.

It was noted that the salmon largely occupied the surface but made extensive dives ranging to 64 metres, making use of the full water column, and occasionally showing a significant increase at night.The results seemed to suggest that potentially the salmon may interact with man-made obstacles such as renewable energy generators either at the surface or throughout the water column. A further group of 85 salmon has been tagged this spring and work is underway to determine whether genetic samples from the fish can be used to identify the specific home rivers to which they each were heading. Some tags have been recovered in the home rivers and others have identified instances when fish were apparently eaten by marine mammals and sharks.

Dr John Armstrong, the study team leader said “Very little is known about the behaviour of Atlantic salmon as they return from high seas feeding grounds on migration around the Scottish coast to home rivers. The data collected using satellite tracking methods is starting to allow us to determine the likelihood that salmon may pass close to proposed marine renewables energy generators. Associated studies are exploring any potential impact on populations of this iconic Scottish fish. 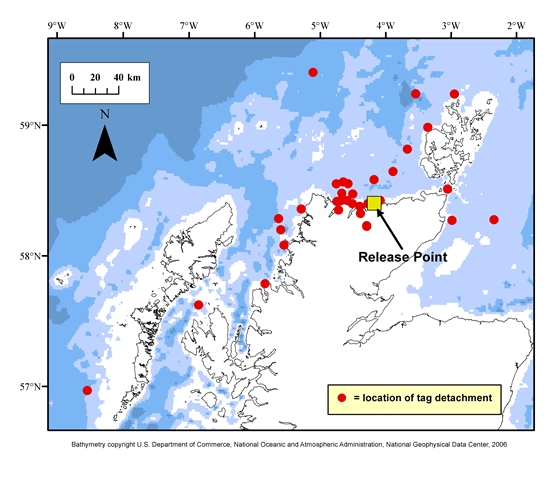