When a research vessel became an aircraft carrier…for drones 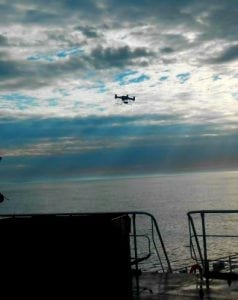 During cruise 0816S, which ran from the 22nd to the 25th June, 2016, eleven marine scientists set sail from Aberdeen harbour towards the small island of Stroma in the Pentland Firth aboard MRV Scotia. The team was comprised of scientists from Marine Scotland, Aberdeen University and the Scottish Association for Marine Science (SAMS).

The cruise’s aim was to survey seabirds and sea mammals using traditional visual methods at the same time an unmanned aerial vehicle (UAV) surveyed photographically the same transects. This simultaneous surveying will allow a quantitative and qualitative comparison between both these methods. The images captured offered enough detail to discern the many up-wellings and tidal rips in this highly energetic site.

Data were also collected from one of either the multibeam echosounder or the acoustic doppler current profiler (ADCP) at all times during the cruise. The data collected from these devices will help to characterise the hydrography of the area of study and provide information on the physical events and features in the water column. These water column events can be linked with surface events photographed by the UAV. Surface water temperature and salinity records were also collected throughout the cruise. 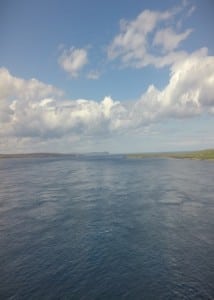 Some of the marine species spotted were razorbills, common and black guillemots, fulmars and gannets. A small number of harbour porpoises were also identified as well as one minke whale. The cruise ended on the afternoon of the 25th June and the Scotia berthed at Scrabster harbour ready for the next trip.

It is very useful to have detailed knowledge of sensitive fauna as well as biological and physical processes of a site targeted for offshore energy development. This can help to streamline and speed up consenting of the site and prioritise considerations during construction and operation. The Inner Sound of Stroma will host the Meygen tidal site. This is the first consented tidal stream energy array site in Scotland. The findings from this survey will greatly inform the potential impacts of this development. The full tidal cycle from ebb to slack water to flow was captured in a variety of ways that have expanded the knowledge of this location.

In addition to the data collected from the Scotia itself, baseline noise was collected using sound recorders attached to drogues that were deployed from the Scotia’s small vessel. A staff member from SAMS, experienced in these techniques, completed this part of the work. Background noise from the whole tidal cycle was recorded.

Once analysed fully, the results of this survey will give a holistic picture of the entire system in the Inner Sound as well as proving if identification of seabirds and sea mammals can be done with UAV technology to a reliable standard. This trip serves to highlight Scotia’s scientific data collection versatility and her capacity for continuous work as a lot of information was generated in only three working days

There is currently a substantial amount of hype surrounding the use of drones for monitoring and investigation work. Many new companies are created each week in Scotland alone. The initial impression of the scientists staffing cruise 0816S was that this technology will be a useful addition to the scientific arsenal and will increase the amount and quality of data gathering for a variety of tasks.