How do dams impact river connectivity and salmon populations? 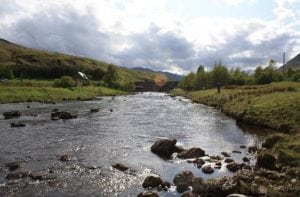 Figure 1: Stronuich reservoir dam on the river Lyon, Perthshire. The river Lyon is a major tributary to the river Tay and an important salmon river, yet it is also heavily regulated for hydropower.

Many of Scotland’s rivers contain important rearing habitat for juvenile Atlantic salmon, an anadromous fish species that supports an economically important fishery and is often a target for conservation with many of its home-rivers designated as Special Areas of Conservation. Many of these rivers also generate hydroelectricity, which is an important source of renewable energy (see Figure 1 for an example).

Since the late 19th century, an extensive network of inter- and intra-basin water transfers has been developed to increase the potential for hydroelectricity and more recently numerous small run-of-river hydropower schemes have been completed or are planned. Notwithstanding the current need for renewable clean energy sources, these developments have led to a substantial alteration in the flow regime of those rivers and their connectivity. In turn, this has raised concerns that the regulation of rivers might have consequences for the maintenance and conservation of economically important Atlantic salmon stocks in Scotland. To mitigate against the possible negative effects of river regulation, river restoration projects aim to restore the natural connectivity and functioning of salmon habitat. However, these projects tend to be expensive with uncertain outcomes in terms of success. Therefore, it is important that tools are developed to identify those areas where restoration efforts are most likely to be successful in terms of yielding high quality habitat and fish production.

One way to assess habitat change (loss or gain) is to look at how dams have altered the connectivity of rivers. Connectivity is a metric (indicator) that describes how well an individual fish can travel along the longitudinal profile (length) of a river. Put simply, it identifies whether adult Atlantic salmon can reach their spawning grounds from the sea, whether juveniles can migrate locally (between summer and winter habitats), and whether smolts can reach the sea from their natal streams. Often the amount of fish habitat lost or gained is assessed by simply identifying changes in accessible wetted area (river area). Although data on changes in wetted area are easily obtained and the approach is potentially useful at large scales, this approach has some drawbacks. Primarily, it does not include any information of the actual quality of fish habitat. In practice, this means that there is a risk that assessments of impacts on longitudinal connectivity focus on areas that may not be important in supporting local fish communities and thus limit the quality and relevance of such assessments.

Using the River Lyon as a case study (Figure 2), scientists at the University of Aberdeen, Marine Scotland Science and the James Hutton Institute investigated the importance of different types of weighting in an analysis of longitudinal connectivity. Put simply, weightings allow you to prioritise river reaches according to their value and this value can be represented in different ways. The weightings used were based on: 1) habitat suitability for spawning; 2) predicted salmon fry production; and 3) wetted area. Habitat suitability for spawning was based on data from a walkover survey that classified the geomorphology of the river reaches in combination with observed habitat use by adult spawners in similar Scottish rivers. The predicted salmon fry production was based on a model developed by staff at the MSS Freshwater Fisheries Laboratory, in Pitlochry. An additional benefit of the fry density model was that it allowed investigation of how fry production in the river Lyon has changed between a pre-regulated (before dams went in) and a regulated state. Wetted area was estimated using Ordnance Survey maps of the river and the lochs present within the river network. 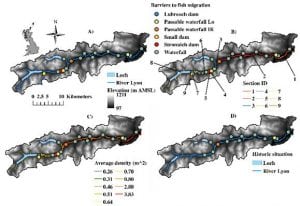 Figure 2: (A) topography; (B) nine sections of a simplified river network, sections are delineated by barriers or tributaries; (C) mean fry density per metre square for each section, based on MSS fry density model; (D) historic map showing river network pre‐regulation, note dams not present and lochs smaller in size, loch at Stronuich not present (based on OS map, period prior to 1930, from National Library of Scotland).

The results indicate that using wetted area alone to assess regulation impacts could misinform managers and regulators, because it suggests that the most important area for connectivity is the area upstream of the Lubreoch hydropower dam. However, according to the other weighting approaches, most of the valuable connectivity for salmon is maintained by the sections lower on the river. This shows that including more relevant details about the quality of the habitat rather than just total area (habitat suitability indicators and river productivity) can improve our ability to identify those areas in the river network that are able to maintain high levels of connectivity. Focussing on those areas could increase the ability of a regulated system to provide suitable in‐stream conditions important for ecosystem functioning or provide a valuable tool for prioritising the removal of historical barriers and weirs that are no longer required. This sort of information could also be useful for setting flow and process‐related targets for the regulation of rivers and floodplains. It is estimated that the introduction of barriers (dams) in the river Lyon resulted in a 21% (95% CI 16–26.5%) reduction in fry production relative to the natural state.

Changes to guidelines for specific river systems should be made with appropriate caution as it is necessary to first ascertain the robustness of the approach. Moreover, any management and conservation decision needs to be based on a solid understanding of what the ecological targets are. This study has looked at a fundamental element (i.e., longitudinal habitat connectivity) that makes up the habitat template, but needs to be part of a holistic approach in which the spatial and temporal aspects of, for example, hydraulic conditions, temperature, community dynamics, and sediment budgets are considered as well.