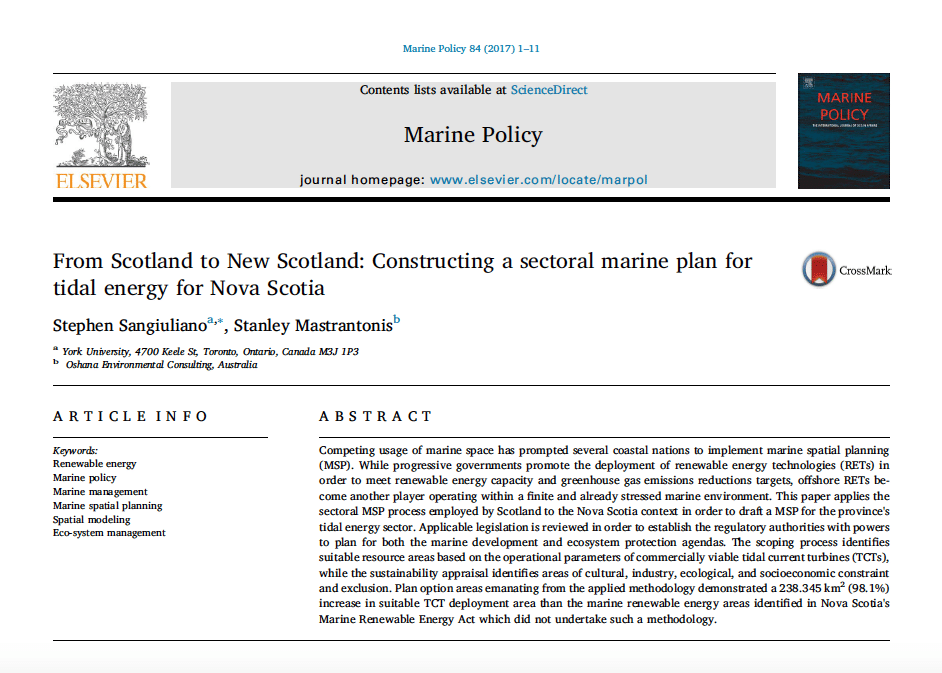 Scotland is well placed to take a global lead in the exploitation of marine renewable energy, boasting a substantial resource potential estimated at 25% of Europe’s tidal resource, 25% of its offshore wind resource and 10% of its wave potential. In order to sustainably develop the offshore marine renewable energy industry in Scottish waters, Marine Scotland has devised sectoral marine plans for offshore wind, wave, and tidal energy which take into consideration technical, environmental, social, and economic constraint and opportunity. Scotland has therefore become the first and only nation in the world to development and implement a sectoral marine plan for tidal energy (SMPTE)

Across the Atlantic Ocean resides another region with similar tidal energy resources. The Canadian province of Nova Scotia is home to the highest tidal range fluctuations in the world, measuring in at a maximum of 16 m, subsequently forcing 160 billion tonnes of water through the Bay of Fundy with every flow of the current, approximately four times more volume that every fresh water river in the world combined. This extreme flow of the tides has been estimated to produce approximately 7.4 GW of power in the Bay of Fundy alone. However, despite substantial provincial and federal investments into the Nova Scotia tidal energy sector, only one tidal current turbine (TCT) is currently deployed in Nova Scotia waters. While industry, government, and R&D organizations have worked in tandem to produce numerous insightful resource, environmental, economic, and social studies, the commercial development of the TCT industry remains relatively uncertain.

An outstanding element in the Canadian approach to tidal energy development in comparison to European nations who have successfully implemented offshore renewable energy is the lack of Marine Spatial Planning. This reality peaked the curiosity of government, academic, and industry stakeholders which lead to the execution of research which applied the Scottish sectoral marine planning methodology to the Nova Scotia context. The following article details the output of this research which produced a theoretical SMPTE for Nova Scotia. The paper compares suitable deployment areas emanating from the application of the Scottish methodology to Marine Renewable-energy Areas designated under the Nova Scotia Marine Renewable-energy Act 2015 which did not undertake a strategic siting process.

Prev IA2017 – Marine litter is a problem
Next Who you gonna call? Diagnostics!