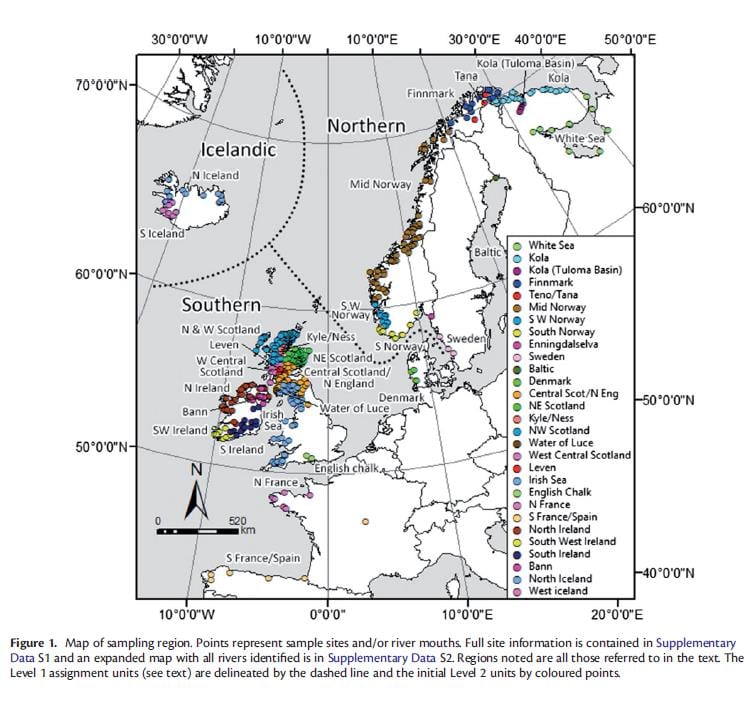 Marine Scotland scientists, including senior author Dr John Gilbey, Eef Cauweiler and Lee Stradmeyer,  have been involved in a recent publication in the ICES Journal of Marine Science.

The publication, which is the results of a collaboration between researchers from laboratories in 11 countries from across Europe, provides the most comprehensive geographical coverage for an Atlantic salmon data-set for genetic stock identification of salmon at sea, and is a unique resource for the conservation and management of the species in Europe.

To facilitate marine stock identification, a genetic baseline was developed covering the European component of the species’ range from the Russian River Megra in the north-east, the Icelandic Ellidaar in the west, and the Spanish Ulla in the south, spanning 3737 km North to South and 2717 km East to West. The baseline encompasses data for 14 genetic markers for 26 822 individual fish from 13 countries, 282 rivers, and 467 sampling sites and provides a hierarchy of regional genetic assignment units.

In the fourth part of the series we speak to Norma Williamson of Shetland Seafood Auctions. Over the pandemic two…