Marine Scotland has been leading this EMFF-funded project which is aimed at involving fishing vessels in MPA monitoring. This is a joint project between Marine Scotland and Scottish Natural Heritage. The project is managed by Seascope Fisheries Research Ltd, with Charlotte Johnston of Crangon Ltd providing monitoring survey expertise.

This is the second in a series of guest blogs from Kyla Orr from Marine Ecological Consulting, who is supporting stakeholder engagement on the project.

The 2019 survey season is now underway as part of the EMFF project that is engaging fishers in marine environmental monitoring. The first survey of the year was successfully completed in the Inner Sound between 11th to 20th March, and on the last day we had the opportunity to meetup with the survey team as they disembarked from Kyleakin. They kindly agreed to a video interview so that we could learn more about how the surveys are planned and run, and capture their thoughts on the highlights and challenges of the trip. 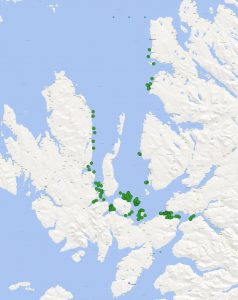 The aim of this most recent survey was to document seabed habitats and Priority Marine Features in Loch Alsh, the Inner Sound and off Wester Ross, using a drop-down video camera.  The team were given pre-determined survey locations from Scottish Natural Heritage (as GPS co-ordinates). Whilst timed to hopefully overlap with herring spawning activity, the survey also coincided perfectly with Storm Gareth resulting in very challenging weather conditions, so each night the team had to think long and hard about where they could safely deploy the drop-down camera. Thankfully, due to the geography of the Inner Sound there were still plenty of sheltered locations where the vessel could safely operate and gather high quality footage of the seabed. A total of 151 sites were surveyed over 10 days, covering a diverse range of habitats from flame shell beds and horse mussels to burrowed mud (see map left for survey sites).

A break in the weather allowed the vessel to steam up to Wester Ross to record footage of herring spawn, which had settled onto a maerl bed in a thick jelly-like mat. This was undoubtably the highlight of the survey for the whole team, and it was captured in the same location where herring were filmed spawning on the recent Blue Planet series (just north of Loch Torridon).  Herring were once abundant on the west coast of Scotland and supported an important commercial fishery. However, stocks declined significantly after the 1960s, and the stock remains at low levels today – hence documenting a potentially important spawning ground was a very positive aspect of this EMFF survey. It is hoped that the drop-down video footage gathered will improve our understanding of seabed habitats that are important for the settlement and survival of herring eggs.

The location of the herring spawn, as well as some of the Priority Marine Features in the Inner Sound, were identified based on knowledge from local divers (members of the Scottish Scallop Divers Association). Some of their observations have been scientifically validated by the video footage recorded during this survey. This is one of the ways in which SNH and Marine Scotland are working with fishers to gather scientific evidence on the distribution and extent of Scotland’s fantastic marine life.

This survey was one of several scheduled to take place this year, and the next surveys will take place in Orkney and Shetland during May and June.