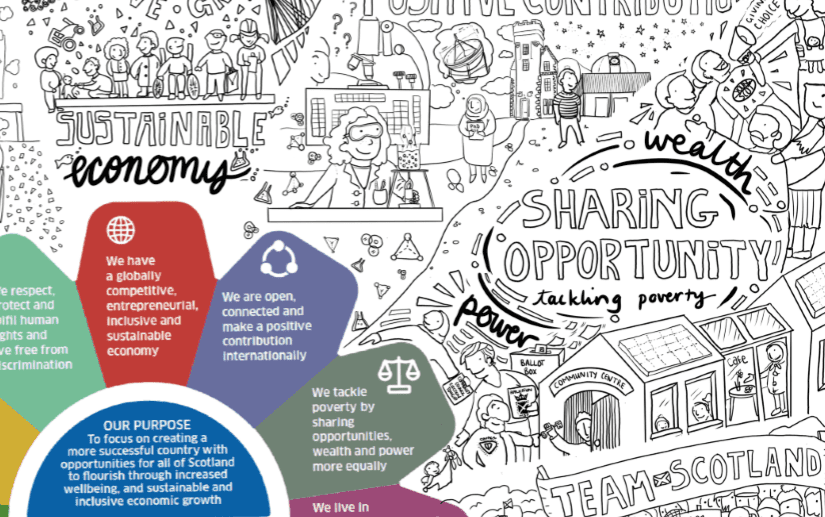 I’ve been dithering about our first National Performance Framework (NPF) blog post. Should we kick off with something big and flashy? Or with a profile of the team? What about the history of how we (and the NPF) got here? Or, perhaps, a case study of how the National Outcomes are being used to develop policy?

And then, something wonderful dropped into my lap(top).

Night 1 done. Phew ? Starting a very unofficial illustration / colouring sheet of Scot gov outcomes to take to my kids school to try to explain what mum does at her work all day! pic.twitter.com/tGqz3NIDWT

As parents often do, my friend and colleague, Linda Hunter, had been fielding questions from her daughters about what she does at work.

So Linda decided to use the National Performance Framework as the centre of an illustration telling the story of how the work we do in the Scottish Government connects to the things and the people that her daughters know.

I drew this illustration for my children and the children in their school class because, when they asked what I do at work, they thought my answers were rubbish. Every time I thought I had come up with a clever answer, I was then asked lots more questions and then “what does that REALLY MEAN?” So I asked them to help me draw it out. And this is the result of all of that. Izzy (8), Ellie (6) and their friends had significant design input. The panels capture stories and songs that they share together at home and sometimes at school too.

Linda drew the illustration with the intention of using it with her daughters and their classmates, so it’s primarily a personal piece of work. But she very generously decided to share the story on social media (captured in this Twitter ‘Moment’).

And when, finally, Linda posted the finished version, it went a bit viral.

I am done’er than a done thing on a done day at the done’nut factory. #illustratingoutcomes colouring sheet for my kids’ class completed. Phew! I’ll post a downloadable link at some point.

Find any spelling mistakes at your own risk ??? pic.twitter.com/LpWKDddOYS

We’re very lucky that Linda has offered the illustration under creative commons terms. Which means it’s available to anyone who wants to use it or adapt it for the purpose of education or for communicating or promoting the NPF and work which contributes towards the achievement of the National Outcomes and the Sustainable Development Goals. The only restrictions Linda would like to put on the illustration are that it’s not used to make a profit. And if it’s adapted, that its original origin and the nature of the adaptation are clearly described. I would make a further request. If you do use the illustration in some way, please get in touch and tell us about it!

The illustration is already starting to appear all over Scottish Government buildings (and beyond). It’s on walls and notice boards, in various sizes, some coloured in, some left black and white. It’s made appearances at team away days and it played a staring role in January’s Fire Starter Festival.

Linda’s had interest from organisations, including the Schools Health and Wellbeing Improvement Research Network and Learning for Sustainability Scotland, who want to use the illustration as a resource or in publications. Corra Scotland are using it in the communities they work with to connect place-based work on the ground with high level strategy.

And, just the other week, the illustration finally made its way to Gullane Primary School to fulfil it’s orginal purpose. I hear it proved very popular.

Next The big idea: Measuring what matters

Scotland's National Performance Framework celebrates its fifteenth birthday. An update on progress and some next steps.