The big idea: Measuring what matters 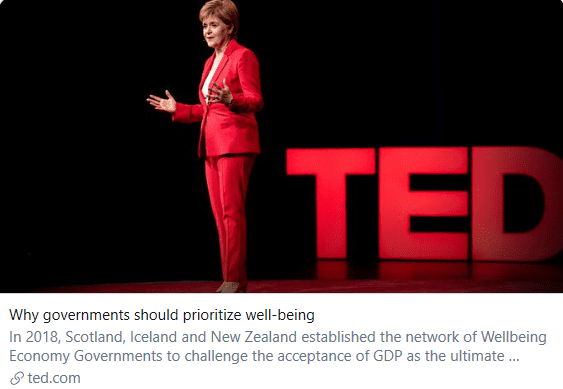 “You know what we choose to measure as a country matters – it really matters, because it drives political focus, it drives public activity and against that context I think the limitations of GDP as a measurement of a country’s success is all too obvious. GDP measures the output of all of our work but it says nothing about the nature of that work – about whether that work is worthwhile, or fulfilling. It puts a value, for example, on illegal drug consumption, but not on unpaid care. It values activity in the short-term that boosts the economy even if that activity is hugely damaging to the sustainability of our planet in the longer term.”

At the time of writing, First Minister Nicola Sturgeon’s first TED talk has been viewed more than 1.5 million times.

TED is a non-profit devoted to spreading ideas. The First Minister’s ‘big idea’ – outlined at the TED summit in Edinburgh on 24 July – is that governments can no longer rely on Gross Domestic Product (GDP) as a sole measure of whether a nation is successful or not. We need wellbeing markers to create a more complete picture of how a country is faring.

“If we reflect on the past decade of political and economic upheaval, of growing inequalities, and when we look ahead to the challenges of the climate emergency, increasing automation, an ageing population, then I think the argument for, the case for a much broader definition of what it means to be successful as a country, as a society, is compelling and increasingly so.”

Which is why, as the First Minister highlighted, Scotland took the initiative in 2018 and established the Wellbeing Economy Governments Group (WEGo). WEGo brings together Scotland, Iceland and New Zealand to challenge the dominant economic policy focus on GDP. The group facilitates the sharing of expertise among officials working to embed wellbeing outcomes in economic policy.

WeGo contends that the goal of economic policy should be collective wellbeing – how happy and healthy a population is, not just how wealthy. Economic growth is important, but it’s not the only thing that is important. And it shouldn’t be pursued at any cost.

But this ‘big idea’ has a longer history in Scotland. We started to embed a broader understanding of economic success – and the concept of ‘wellbeing’ – in the work of government back in 2007, when we published the National Performance Framework (NPF) for the first time.

The NPF sets out our specific purpose – and the outcomes we want to achieve. It also lists the social, economic and environmental indicators against which we judge our progress.

The National Outcomes – given statutory weight through the Community Empowerment (Scotland) Act in 2015 – took GDP off its pedestal and put economic growth on the same level as environmental and social outcomes.

And last year – we published a revised version of the NPF in June 2018 – we made ‘increased wellbeing’ an explicit part of ‘Our Purpose’. We also made it clear, that to achieve the National Outcomes, everyone in Scotland needs to work together. The NPF is now truly ‘Scotland’s wellbeing framework’.

The National Indicators – the measures which underpin the National Outcomes – help us understand how we’re doing. They are as varied as the happiness of children, access to green spaces and access to housing. None of these are captured in GDP statistics, but they are all fundamental to a healthy and happy society. And they incorporate a range of data – from social attitudes and perceptions to economic and environmental statistics – to help paint that rich picture of Scotland’s performance.

In her TED talk, the First Minister went on to say:

“You know, when we focus on wellbeing, we start a conversation that provokes profound and fundamental questions – what really matters to us in our lives. What do we value in the communities that we live in, what kind of country, what kind of society do we really want to be”.

We published ‘Scotland’s Wellbeing: Delivering the National Outcomes’ in May to support that conversation. Drawing together key trends and data across the National Outcomes for the first time, the report is a baseline picture of Scotland’s wellbeing. It gives us an opportunity to reflect on strengths, such as the proportion of energy that comes from renewable sources, the value of our natural capital and the closing educational attainment gap between Scotland’s most and least deprived areas. And also on areas where challenges remain, including life chances affected by poverty, and how different life can be depending on aspects of your identity and where you live.

The report is a summary of what Scotland is like now, and what it’s been like over the past few years. It doesn’t seek to assess what needs to be done to meet the challenges and opportunities of the future. Rather, it is intended to act as a tool and stimulus for us to develop the holistic policies and activities that are needed to deliver the Scotland envisioned in the NPF. The overall picture of wellbeing it presents should encourage decision makers to dig deeper into the evidence.

Prev The big picture
Next Does the National Performance Framework mean anything to the third sector?

Improving how we predict and measure our impact

Along with Social Investment Scotland and CivTech we're seeking a streamlined, user friendly way to predict impact when planning future…