Talking of principles often causes eyes to glaze over, minds to wander and sleepy heads to nod off… But taking an open approach as our key principle guided us. It made our public discussion a success.

Easing lockdown has dominated the media and conversations between people up and down the country for the last few months, after the immediate threats of Covid began to slow. Guided by the principle of openness, the Scottish Government had an online public discussion about the kinds of changes people wanted to see. People’s concerns and ideas helped shape the Route Map for coming out of lockdown. 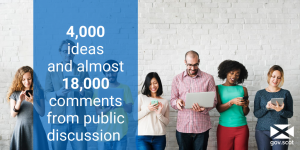 Online discussion generated around 4,000 ideas and almost 18,000 comments submitted by the public on the platform

Openness with a difference

Openness means everyone should be able to take part, as easily and quickly as possible. An online site to gather ideas was set up by the Digital Engagement team, where people could discuss and share ideas and concerns. In just one week, we saw over 4,000 ideas and 18,000 comments on the site.  These ideas helped the government develop plans for easing lockdown, published in the Route Map. In media coverage of the public discussion, the BBC made an observation about the additional benefits of digital engagement; crowdsourcing people’s stories and experiences served as a kind of collective diary of the nation’s experiences in this traumatic and unprecedented time.

Using a digital platform to crowdsource ideas, experiences and concerns is different from traditional public attitudes surveys. It’s not about finding out about pre-determined outcomes. An open discussion about hopes and fears shines a new light on how people really feel, a reminder of our common humanity – the voices and stories of people who are living this reality.

Our principle of openness

While the exercise itself was exciting because of the overwhelming public response, the process was nothing new for Scottish Government. It’s useful to understand how this openness fits with the overall approach.

As a member of the Open Government Partnership, we share the values of transparency, accountability and citizen participation with 100 governments around the world, and seek to be a leader on high standards of openness. Our National Performance Framework that guides all our work puts people at the heart of policymaking. Another iteration of our government approach to engaging with the public is the Scottish Approach to Service Design; an explicit commitment to designing services with people rather than doing to them. 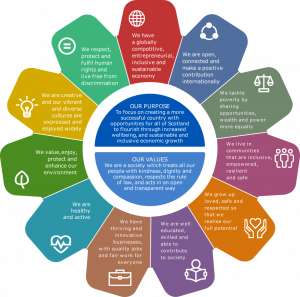 Our team also manages the Scottish Government’s online consultations hub. Consultations, which often look like traditional written surveys, are another important way in which we involve people in the design and shaping of decisions and policy. These initiatives collectively make the government more transparent, build trust between people and power, and strengthen democracy.

Rather than consultation in its traditional format of a survey being the limit – or the limit of our ambition – we try to find new ways to use new technology to make it easier for people to be involved. How we do this online and make it inclusive makes it all the more challenging. We’re still learning; we know not everyone is online, and life in a world with Covid makes this still more difficult. 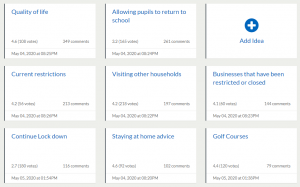 Ideas submitted to the online platform and discussed by others

Opening up across the globe

Of course many other governments around the world have recognised that public engagement at a time of crisis feels more important than ever. The World Health Organisation (WHO) developed criteria for governments in the handling of the pandemic, including that ‘communities have a voice, are informed, engaged and participatory in the transition’. The Scottish Government has adopted this and the other WHO criteria into our Route Map through the Covid crisis. This recommends the involvement of the public throughout, such as the public discussion run by Scottish Government described here.

There have been experiments with digital to support existing engagement processes elsewhere, such as citizen assemblies online in France – or sharing information and data more innovatively and transparently as seen in this global database of examples taking an open approach to Covid-19.

Talking about the wider context of openness in the Scottish Government makes something like holding an online public conversation seem less radical, and more just another way in which we work, based on our principles. In many ways across the government we are designing with, not doing to, as a principle in how we work delivering policy and services.

Continuing the conversation with the public throughout the transition is key. We always learn from every consultation or engagement we do – and this public discussion was no different. We’re taking all our lessons on board; openly drafting our approach is part of this. While we’re still operating in a more online world with Covid, it looks like most public engagement will be digital for the foreseeable. We’ll see you online!

Prev Having your voice heard in an online world: Smart Places series
Next Join the team: Senior Digital Engagement Manager

Simon Malzer, Public Involvement and Engagement Manager at NHS Lothian, shares some insight into the development of their new Framework…

Creating open, democratic spaces, where people can engage with each other on an equal basis

Putting the tea in teamwork

In the last year, tea (yes, tea!) has helped to initiate over 170 conversations between over 240 Scottish Government employee’s…