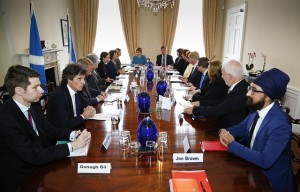 The organisations involved were:

Speaking ahead of the meeting, the First Minister said:

“Scotland’s economy is fundamentally strong, but continued EU membership and our place in the world’s biggest single market is absolutely vital when it comes to protecting jobs, investment and long term prosperity.

“Clearly there is now uncertainty for business, so we need to protect Scotland from that as much as possible. Today’s meeting with leading business organisations is a vital step in that process, as Scotland’s business community has a great deal to play in this – by coming together today, they can start to map out a united response, which will be crucial in protecting Scotland’s interests.”

“The key message I and other Ministers have been relaying is that we are still firmly in the EU and business and trade should continue as normal. On that front, nothing has changed.

“We know that Scotland is an attractive place to do business and we continue to be open for business with European partners and further afield.

“What we’ll be discussing with business leaders is how we preserve and strengthen those links, and what steps we can collectively take to ensure Scotland’s strong economic position is maintained.” 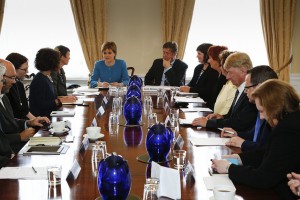 Prev Protecting consumers & businesses in Scotland
Next Next Post