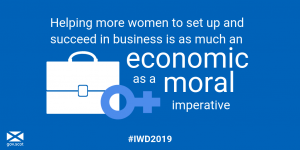 Women in the economy

Tackling the gender gap in enterprise is an economic and moral imperative for the Scottish Government, and we have taken various measures to support more women to set up and succeed in business.

Actions have seen the proportion of women actively starting a business in Scotland catching-up to the UK average and the gender gap in business start-ups reduced at a time when it has increased across the rest of the UK.

Digital Economy Minister Kate Forbes wrote a blog for International Women’s Day in which she outlines the importance of more women joining the tech industry in particular.

To kick the week off on 4 March, First Minister Nicola Sturgeon visited Forth Valley College to meet with the college’s record number of female engineers, while Economy Secretary Derek Mackay met apprentices at the Buchanan Wharf development and the University of Glasgow. 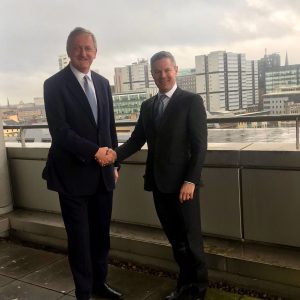 inance and Economy Secretary Derek Mackay met with Lord Mayor of London to discuss Scotland’s attractiveness for international investment and how the City of London and Scotland can work together to drive Financial and Business services.

Fair Work Minister Jamie Hepburn has welcomed the news that Dundee has the ambition to become the UK’s first Living Wage City. 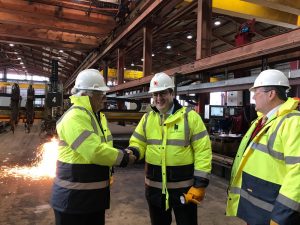 More than 29,000 people will benefit from Modern Apprenticeship opportunities next year in a continued effort to support youth employment, Fair Work Minister Jamie Hepburn announced.  The 29,000 target includes Modern and Graduate Apprenticeships and puts Scotland on course to reach a longstanding commitment to 30,000 new apprenticeship starts each year by 2020.