May 3, 2019 by charlottebarbour No Comments | Category Economy, Employment

The Scottish Government has launched ‘A Trading Nation’, an export plan backed by £20 million investment, to help increase the value of Scotland’s overseas exports and provide support to businesses considering overseas trade.

A University of Strathclyde spinout company, ClinSpec Diagnostics Limited, is developing a pioneering new blood test for the early detection of brain cancer. 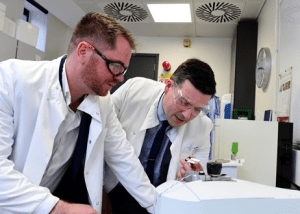 today to announce the £600,000 of funding from Scottish Enterprise that supported their spin-out from the University of Strathclyde and development of an innovative new blood test for brain cancer.

“The blood test demonstrates significant advancements in cancer detection methods, and will play a vital role in helping to save lives. This technology also paves the way for similar blood tests to be developed in the future for other diseases.

“By supporting this promising university spin-out, the Scottish Government is helping to translate key research outputs into practical medical innovations.”

Read more about the funding

At a summit held this week by Finance Secretary Derek Mackay and Energy Minister Paul Wheelhouse, the industry representatives agreed that collective action was needed to ensure supply chain companies are well positioned to benefit from upcoming offshore wind projects.

The Scottish Government is exploring the options open for attaching supply chain conditions and incentives to Crown Estate Scotland leases as well as ways in which the Scottish Parliament reviews and approves decommissioning plans.

“It’s an honour to welcome Calero’s European headquarters to Edinburgh. The decision by Calero to lead its European operations from here is testament to Edinburgh, and Scotland, that is fast becoming known worldwide for its vibrant technology scene. The Scottish Government has published an ambitious plan to boost international exports and I am delighted that in Calero, we have added another important exporter to our economy, an encouraging marker for economic development in Scotland.”

Watch a video from the visit