May 10, 2019 by charlottebarbour No Comments | Category Economy 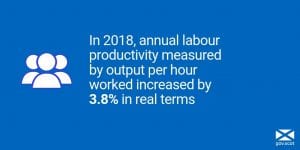 The latest labour productivity statistics were released and show Scotland is performing well.

This week Ministers announced that 40 jobs would be created at Cherwell Software in Dundee, following a £3.1 million research and development grant from Scottish Enterprise.

The move underlines the Scottish Government’s commitment to investing in research and development to help grow Scotland’s economy and ensure we are at the forefront of future technologies.

Read more about the R&D funding for Cherwell

Find out more about the nation-wide schools programme

The lab is part of the University’s Space Glasgow network, which brings together engineers, physicists, geologists, mathematicians and computer scientists on cross-disciplinary space research projects. 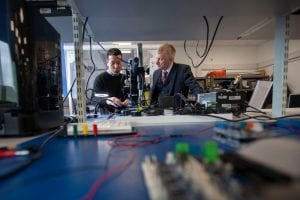 Mr McKee met researchers from the University’s School of Engineering to hear more about their work in five key areas: access to space, space technologies, orbital dynamics, landing technologies, and surface and subsurface exploration. He said:

“Scotland already has an innovative and diverse engineering base, with world-class companies competing in international markets.  As a country already punching above its weight in the space sector, we are in a great place to consolidate these existing strengths to inspire skills development and STEM take-up.

“This new lab will play a vital role to support the development of the sector in Scotland and I am pleased to see the University of Glasgow supporting these ambitions by providing exciting new opportunities for their students.”

Read more about the technology laboratory

The Scottish rail freight is set to benefit from up to £25 million of ring-fenced funds to help strengthen the industry over the next five years.

The Scottish Government commitment was announced by Transport Secretary Michael Matheson during a visit to the Freightliner Terminal in Coatbridge.

Read more about the freight fund

The future of Air Departure Tax

This week Ministers announced that following updated advice from the UK Committee on Climate Change – and the new 2045 target for net-zero emissions adopted as a result – reducing Air Departure Tax is no longer compatible with Scotland’s new emissions reduction targets.

The Scottish Government welcomes the efforts of Scotland’s tourism sector and aviation industry to reduce carbon emissions and will continue work with them to support the sector in a sustainable way.

Prev This week: 03/05/19
Next Unemployment rate at record low for fifth consecutive month