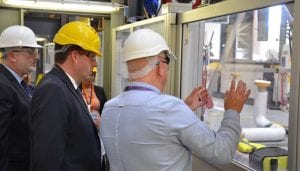 The Flexible Workforce Development Fund provides employers with an opportunity to access £15,000 worth of funding to create bespoke and tailored training opportunities to help address skills gaps within their organisation – delivered by Scotland’s college sector. This approach offers value for money for both the employers and for the people of Scotland.

The development is being built with £2 million of support from the Scottish Government. Economy Secretary Derek Mackay said:

“A house provides more than just somewhere to live – it offers a sense of pride and belonging, and enables 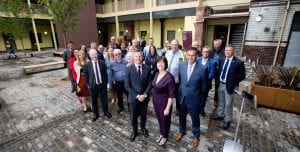 independence and confidence. I am delighted to see the difference these high quality, new homes are already making to people and the positive impact this development will have on the wider community, bringing together elements of the old and new to create a vibrant and unique space.

“Everyone deserves a safe, warm, affordable place to live. That is why the Scottish Government is investing a record £3 billion to achieve our ambitious target of 50,000 affordable homes by 2021, of which 35,000 will be for social rent. Successful developments like this keep us on track in achieving that target.”

Official statistics published by HMRC this week showed that income tax revenues grew by 1.8%, to £10.9 billion in 2017-18, with growth driven primarily by an increase in contributions from higher and additional rate taxpayers – those earning above £43,000 in Scotland in 2017-18. The figures also showed that combined number of higher and additional rate taxpayers in Scotland is growing at a faster rate than the rest of the UK, according to new figures.

“These statistics show that the Scottish Government’s choices on taxation are helping to create a more progressive tax system at the same time as our economy is growing with low unemployment.”

Read more about the figures.

This week the Office of Budget Responsibility warned that a ‘No Deal’ UK EU Exit could lead to a UK recession. Finance Secretary Derek Mackay said the warning confirms what the Scottish Government have been saying for months – that a no deal Brexit has the potential to push the economy into recession, impacting business investment and household incomes.