Under certain environmental conditions, marine phytoplankton can grow very quickly and form what are called “Harmful Algal Blooms” or HABs. In some instances these natural blooms can impact the marine ecosystem by causing mortalities of animals that live on the sea bed. This may occur either directly as a result of toxins produced by the algae or as a consequence of oxygen depletion in the water caused by phytoplankton decay. In some instances HABs can have an adverse economic impact on marine aquaculture with high concentrations of algal toxins forcing the closure of shellfish harvesting areas.

A number of different phytoplankton species causing HABs are routinely detected in Scottish waters. Examination of old scientific literature can find records of HABs being present in this region over a century ago and scientists at Marine Scotland Science consider them a natural part of the Scottish phytoplankton community.

The evolutionary purpose of these algal toxins is not clear. It was suggested that the toxins may act as a zooplankton deterrent to prevent them grazing on the phytoplankton cells. The production of toxins might also act as a mating signal between two different cells of the same species. Shellfish feeding on toxin-producing phytoplankton species can accumulate large quantities of toxins in their tissue. Although shellfish are not affected by the toxins, subsequent consumption by birds, seals or humans can lead to severe health implications. To protect consumers, an EU directive was implemented, requiring all member states to test their shellfish for the presence of algal toxins. In Scotland this is rigorously implemented by the Food Standards Agency and, as a result, shellfish placed on the market are safe for human consumption.

PSP toxins are powerful neurotoxins produced by dinoflagellates from the genus Alexandrium. There are more than 20 known PSP toxins, the most potent being saxitoxin. 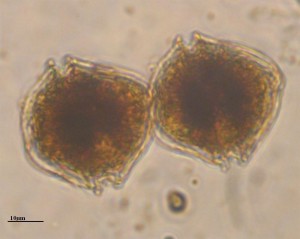 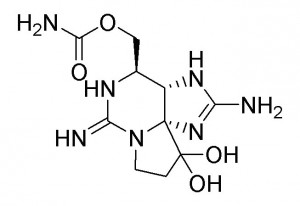 The chemical structure of saxitoxin is shown above

Domoic acid is the toxin that causes ASP and is produced by the diatom genus Pseudo-nitzschia. During the late 1990s, high concentrations of this toxin in King Scallops (Pecten maximus) resulted in prolonged closures of Scottish offshore scallop fishing beds causing a severe economic impact on the industry. 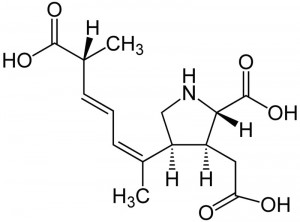 The structure of domoic acid is shown above

There are a number of different types of lipophilic shellfish toxins. The most common in the Scottish waters are the diarrhetic shellfish poisoning (DSP) toxins such as okadaic acid which can cause gastrointestinal problems. Occurrence of DSP toxins in shellfish has been associated with the genus Dinophysis and Prorocentrum lima.

(Caption:) Dinophysis cells (above left) may produce the DSP-inducing toxin okadaic acid. The structure of okadaic acid is shown (above right).

Other lipophilic shellfish toxins (known as azaspiracids, yessotoxins and pectenotoxins) have also been detected in Scottish shellfish but harvesting closures as a result of high levels of these toxins are not as common. 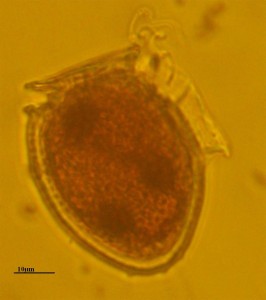 The structure of okadaic acid is shown above

Scientists at MSS have been involved in a project developing the use of SPATT (Solid Phase Adsorption Toxin Tracking) to detect the presence of biotoxins which may be released into the sea by harmful algae. SPATT has the dimensions and appearance of a tea bag filled with a resin capable of binding to a wide range of toxins. Deployment of SPATT bags generally occurs on a weekly basis at several locations across Scottish coastal waters. At the laboratory, the toxins are washed off the resin using a solvent and then identification and quantification of the diverse toxins is performed using dedicated analytical instrumentation. This simple monitoring technique provides MSS scientists with very useful information regarding toxins diversity at various locations across the Scottish inshore waters throughout the year. Continuous SPATT monitoring, in combination with phytoplankton analysis, will help MSS scientists to generate data which could help reveal trends of toxic events around Scotland. 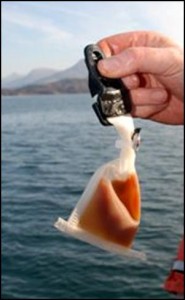 A SPATT bag filled with resin before deployment at Loch Ewe

The seaweed Chondria armata has also been seen to produce domoic acid. In Japanese folklore it is used in very small doses as a treatment for pinworm infestation.

Because blooms of toxic dinoflagellates sometimes turn the sea red or brownish-red they are known as “red tides”. Such water discoloration was noted in the Bible (Exodus) and Darwinmade microscopic observations of discoloured water from an apparent dinoflagellate bloom off Chileduring the voyage of the HMS Beagle.

Further information on the warning of algal toxin events can be found at: