What are Non-native Species?

When species of plants and animals occur unexpectedly in areas outside their normal range they are called “non-native species”. Examples of how non-native species can be introduced to new areas are by accidentally travelling on an aeroplane or ship (e.g the black rat), or when fish or shellfish imported for the aquaculture industry escape (e.g the Pacific oyster).

In most cases non-native species do not cause any problems in their new environment. However, because they are newcomers to the region they have the potential to live and breed without the same dangers of predators, pests or diseases that have evolved to limit the native population. This means that they may be able to survive better than the local species, taking away their food resources and habitats and lessening their numbers while multiplying rapidly themselves. This can have a major impact on an area’s ecosystem and biodiversity.

Shipping is the most common route by which non-native species are introduced into the UK marine environment. Vessels can transport species to new areas in two ways, through the discharge of ballast water or through biofouling. Biofouling occurs when species attach to the hull, sea chest, anchor chains or other structures on a ship and are transported as unwelcome passengers around the world. 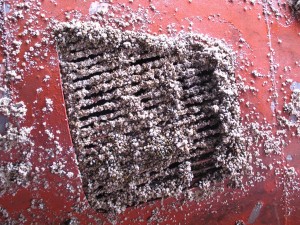 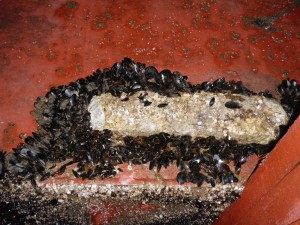 Mussels growing around a ship’s anodes

Previous posts on this blog have explained the monitoring of marine phytoplankton and zooplankton at Marine Scotland Science. Experts performing the analysis of these samples are aware of the importance of invasive non-native species and are alert to their presence.

Scientists at Marine Scotland Science have been involved in the Marine Aliens II project, a joint collaboration with various other institutes in the UK. During this research, settling panels made from a special type of polypropylene were lowered into the water at different marinas throughout the country. The panels were left for sets of either two or eight weeks before being collected. Scientists then identified and counted the different types of animals that had attached to them. 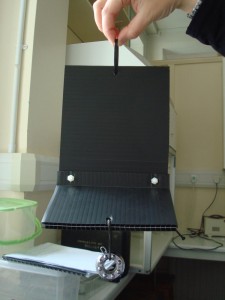 A polystyrene panel before being lowered into a marina 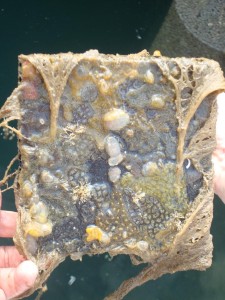 A polystyrene panel after submersion in a marina for 8 weeks

Scientists at Marine Scotland Science have also been investigating the biofouling present on vessels operating in the North Sea. Vessels arriving in Scottish dry docks have been inspected for signs of biofouling and samples collected when it has been suspected. All the various organisms collected have been identified by experts in the laboratory, thus improving our knowledge of the species that are being transported around our waters by shipping. 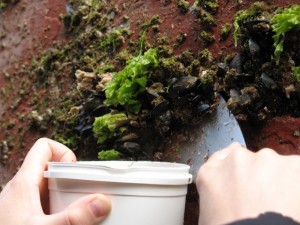 A scientist scrapes biofouling from a ship’s hull

What the Studies Have Shown

No new non-native species have been recorded from the biofouling or Marine Aliens II surveys. However, non-native species that have already been recorded in British waters were observed. These included the Japanese skeleton shrimp Caprella mutica (native to Japan), Darwin’s barnacle Elminius modestus (native to Australia) and Bugula simpex, a bryozoan originating from either the Mediterranean or North America. 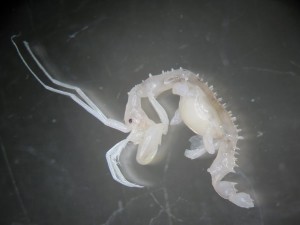 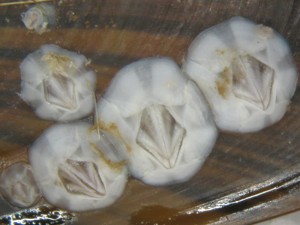 The cost of invasive non-native species to the British economy is estimated at £1.7 billion per year.

More information on invasive species can be found at: