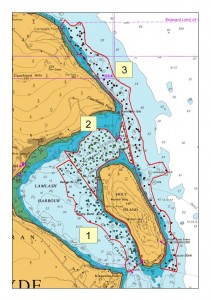 A map of the three survey areas in and around Lamlash Bay: 1) western area of Lamlash Bay 2) no take zone 3) outside reference area. Four quadrat images are to be taken at each station (n=30).

In September 2008 part of Lamlash Bay, Arran, became a community marine reserve and is now a No Take Zone (NTZ), the purpose of which is to help protect and enhance biodiversity.  In addition to the enhanced biodiversity there is also an expectation that the No Take Zone will result in the scallop stocks being enhanced.  Two baseline surveys, conducted by Marine Scotland Science in June 2009 and November 2010, collected data on scallop abundance in and around the waters of the NTZ.  This survey will repeat the survey of the NTZ and two control areas (Figure 1) in order to assess whether changes have taken place in the structure of the benthic community in the intervening four years.

2. Conduct a bathymetric study of the area to the south of Arran MPA

The area to the south of Arran will be surveyed using multi-beam, bathymetric techniques.  Data from this survey will be processed at a later date and will be used to derive sediment maps.