How do seals interact with shipping vessels? 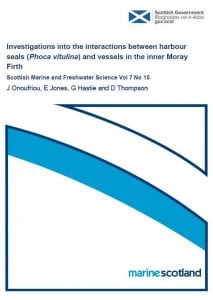 As shipping activity continues to increase around the world, understanding the way that marine mammals interact with vessels is of particular importance. Such concerns generally relate to potential harmful effects of increased shipping noise on marine mammals and the potential for physical injury due to collisions. This is a particular issue for harbour seals (Phoca vitulina) whose populations have experienced significant local declines in Scottish waters.

To understand how harbour seals interact with vessels, a telemetry-based study of the swimming behaviour of seals was carried out in the Moray Firth to compare seal and vessel movements with the purpose of identifying potential areas with high spatial overlap. The study also provided data on seal movements between haulout areas, to identify connectivity between seal haulout sites in the Dornoch Firth Special Area of Conservation (SAC) and potential areas of construction in the inner Moray Firth. To meet the project aims, 37 GPS tags were deployed on harbour seals at two different sites at Ardersier and in the Dornoch Firth during the two year study in 2014/15.