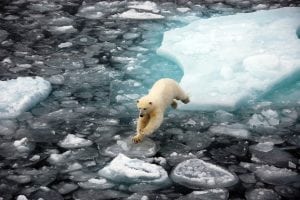 While the Arctic faces rapid warming and less sea ice currently covers the Arctic Ocean than ever before at this time of the year, an international partnership launches a major project to improve our detailed understanding of the processes and impacts of this changing climate and to construct better long-term forecast systems for the increasingly extreme weather of the Arctic and the wider northern hemisphere.

Blue-Action is a four-year research and innovations project funded by the European Union’s Horizon 2020 programme with €7.5 million investment. It brings together 116 experts from 40 organisations in 17 countries on three continents working in academia, local authorities and maritime industries.

Pooling their expertise, skills, approaches and networks, the partners aim to improve how we describe, model and predict the weather and climate on seasonal to decadal time scales in the Arctic and over the northern hemisphere. This information will allow communities and businesses in Eurasia and North America to develop and plan their activities better.

Locally, scientists at Marine Scotland Science have studied and monitored the exchange between the Atlantic Ocean, Nordic Seas, and Arctic Ocean, for many years. Detailed observations of water movement and water properties have been collected in the Faroe-Shetland Channel for the past 20 years, and will continue as part of the Blue-Action project. While the Faroe-Shetland Channel may seem a long way from the Arctic, circulation through this oceanographic gateway is important for conditions in the polar region.

While the project begins its work on 1st December 2016, the Blue-Action kick-off meeting will be held 18-20 January 2017 at the Max Planck Society’s Harnack-Haus in Berlin.