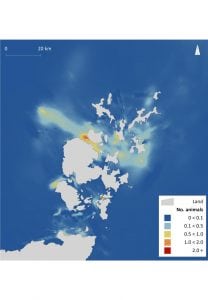 In areas such as Orkney and the Pentland Firth, fine scale habitat features, such as tidal flows, can lead to these broader scale maps not accurately capturing seal usage of some areas. Using a combination of telemetry data from tagged seals, and counts of seals from aerial surveys, SMRU have developed a model that uses known seal movements combined with habitat features to describe at-sea usage by harbour seals.

The work was funded by Scottish Government (Contract Research Fund) and Scottish Natural Heritage (SNH) and Marine Scotland anticipates that the maps will be useful for marine renewable developments, as well as for other marine spatial planning applications.