For those of you who may not be aware, since 2000 Merchant Navy Day has honoured the brave men and women who kept our ‘island nation’ afloat during both World Wars, and celebrated our dependence on modern day merchant seafarers who are responsible for 95% of the UK’s imports, including half the food we eat, plenty of the fuel we burn and many other products and goods.

This year we wanted to bring you a blog from one of our marine colleagues, First Officer Safety Alexis Lee. In May this year, Alexis took over as Officer in Charge for a three-week trip on one of our Marine Protection Vessels, the MPV Minna.

It’s fair to say it was an interesting three weeks….

I found out  early in spring that in May, I was going to be asked to step up to be Officer in Charge of the MPV Minna in May – effectively, being put on temporary promotion for three weeks and acting as Commanding Officer, or Captain, for the three- week trip.

Having worked continuously towards this goal for the past 10 years of my life, taking countless exams and spending many, many months at sea I jumped at the opportunity. MPV Minna’s Commanding Officer, Captain Andrew Sutton would be travelling to Africa to volunteer on board African Mercy, a hospital ship operating all around the continent of Africa. And that would leave me in charge of the MPV Minna.

So what does it actually mean when you are Captain? Well it means I am ultimately in charge of every operation that takes place on board the vessel. From galley to engine room to navigating on the bridge- ‘the buck stops with me.’ As captain you are available 24 hours a day on board and must be ready to deal with any eventuality. Something I would quickly appreciate within 12 hours of sailing from Glasgow. 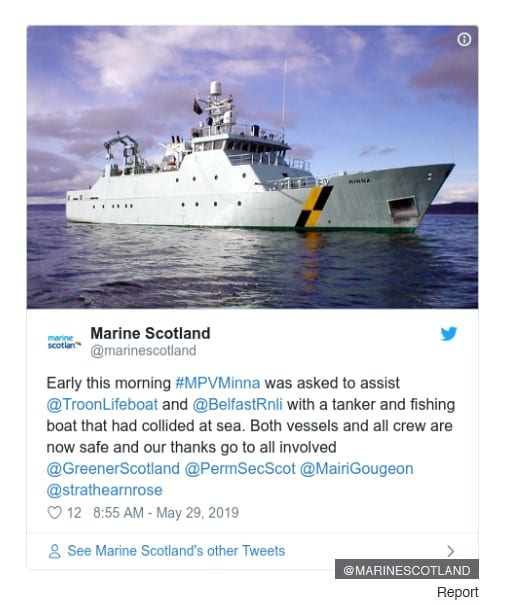 0400 on my first morning at sea, I received a call from the first officer executive to inform me that Belfast Coastguard had just called the vessel via VHF radio to ask for assistance. A fishing vessel and a tanker had just collided approximately 8 miles from our position and we were the closest vessel to the incident. Extra engines were put on line and emergency preparations were commenced. We began making our way at best speed. Thankfully arriving on scene we could see the fishing vessel was still afloat with no reported injuries on board- but with some significant damage. The damage suffered by the tanker was minimal. We were thanked by the coastguard and stood down after carrying out a damage assessment of the tanker. The fishing vessel was escorted back to port by the RNLI. It was certainly not a morning I will ever forget. And we made the BBC website!

The remainder of the trip was still to present quite a few challenges. However the support I received from the officers and crew on board was unquestionable. In addition to that I am very lucky to have some great colleagues from around the fleet and ashore, including other commanding officers, who gave me some fantastic advice.
As I type this, I am now back on the MPV Minna and back to my substantive rank. My Commanding Officer is safely back from Africa and life on board has returned to normal.  I’ve had chance to look back at that first trip and reflect on my experience.

A lot has been written in the media recently on the subject of imposter syndrome- I can certainly empathise with a lot of it. Despite knowing that I was ready to take this opportunity – quite literally having it written in black and white on my master mariner’s licence, there was still that nagging fear that maybe I wasn’t good enough or ready enough to take this on. It think it is very important to acknowledge these fears, but ultimately at sea you have stamp on them and get on with the job.

As well as that I was the first female officer in charge in the history of Marine Scotland Compliance. That was very much at the forefront of my mind throughout the trip and it comes with its own pressure. Rightly or wrongly, I felt an added responsibly to do the best possible job I could. And now 6 weeks later I am very happy to say that I feel I did that. And if I am lucky enough to be asked to do it again I would not hesitate.